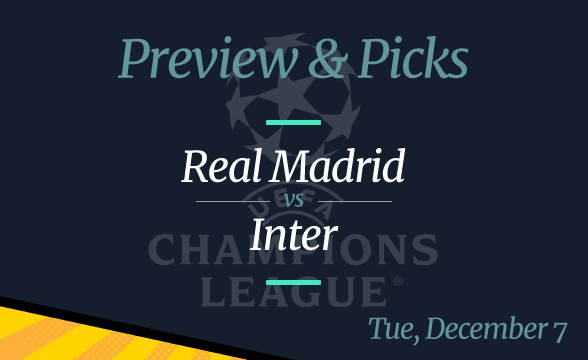 Both Real Madrid and Inter have already booked their tickets to the Champions League knockout phase. The only question is which team will get to the top 16 as the top seed? We’ll find the answer to that question this Tuesday at Santiago Bernabeu.

The winner of the Real Madrid vs Inter game will finish the first part of the 2021-22 Champions League at the top of Group D. If the game finishes in a tie, Real Madrid will get to the knockouts from the #1 spot. The reason is that Los Blancos currently have two points more than Inter.

All odds are per FanDuel as of December 6.

No Benzema, No Problems?

Real Madrid’s striker Karim Benzema finished in the #4 spot in the 2021 Ballon d’Or voting, the highest of the players currently playing in Spain. Actually, he also ranks higher than any player from the Italian Serie A, including those playing for the reigning champ, Inter.

The fact that he’s been so good for Real Madrid means that this team is going to miss him a lot. The thing is that Benzema will not play on Tuesday evening due to a thigh injury suffered on Saturday during La Liga game with Real Sociedad.

Benzema spent only 16 minutes on the pitch that day but his team still managed to grab a win. Real Madrid won 2-0 with goals scored by Vinicius Junior and Luka Jovic. Will they be able to do something similar against Inter?

Inter Going for All Three Points

Inter is without a win over Real Madrid in the Champions League in the 21st century. The last time the Italian team beat Los Blancos in this competition was in 1998. Is it time for the bad record to end?

Inter players surely want it to end. They are coming to the Spanish capital with plenty of motivation. A win on Tuesday would get them to the top of the group table. In turn, this would mean that they would take on a second-placed team from another group in the first round of the knockout phase.

They have the will to win, but do they have the quality to make their dream come true? Probably, yeah. The proof is that they’ve been playing great lately, winning nine of their previous 11 games in all competitions. The most recent of those wins was a 3-0 demolition of AS Roma in the capital of Italy.

Another thing going in favor of Inter is the schedule. Their fixture list doesn’t look that ugly unlike Real’s. Inter’s next opponent is Cagliari, a team from near the bottom of the Italian Serie A. Meanwhile, a few days after the Real Madrid vs Inter game, Los Blancos take on the reigning champion of the Spanish La Liga, Atletico Madrid.

Knowing all this, no one should be surprised if we saw the visiting team getting a win at Santiago Bernabeu.