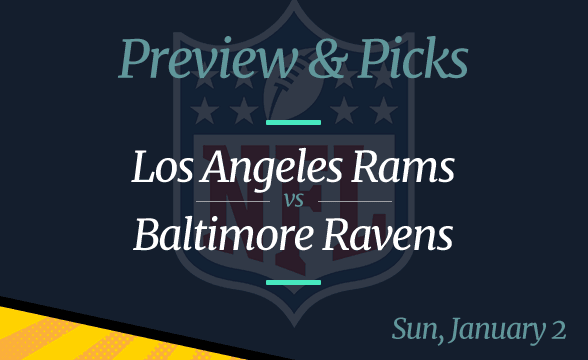 Last weekend, the Los Angeles Rams overtook the #1 position in the NFC East from the Arizona Cardinals. They now have one win more than the Cards, meaning that in order to secure the divisional title, they need to continue winning. The team they need to beat in Week 17 is the Baltimore Ravens, who are also in need of wins in order to keep their postseason dream alive.

The Ravens are sitting in the #2 position in the AFC North, with one win fewer than the Cincinnati Bengals, which means that they still have a chance to get to the top. For that to happen, though, they need to put an end to their four-game losing streak.

All odds are per FanDuel as of December 29.

Over the last couple of weeks, the Ravens’ defense has been going from bad to worse. In their first game in December, they conceded 20 points. In the second, they conceded 22, then 31, before finally conceding 41 last weekend. It’s needless to say that they lost all of those games.

Meanwhile, the Rams won all of their four games in December, scoring 117 points along the way. Their superb offensive performances happened due to the fantastic form of their quarterback Matthew Stafford.

The former Lions’ signal-caller made nine touchdown passes in those four games. He did, however, have a nightmare outing last weekend, when four of his throws ended up intercepted by the Minnesota Vikings’ defense. Nevertheless, his team still managed to win 30-23.

Is It Time for Lamar Jackson to Finally Return?

The Baltimore Ravens quarterback Lamar Jackson got injured in Week 14, missing the next two games. Even with him as their play-caller, the Ravens weren’t too great. However, with him out of the field, they’ve been nothing short of horrible in the offense.

As a result, they’re now coming into Week 17 after four straight losses, which have made their record 8-7. If the season ended now, they would get to the postseason. However, the same might not be the case if they lose on Sunday. In fact, it’s very likely that they would drop out of the playoff positions in the AFC Rankings.

The Ravens stand no chance against the mighty Rams without Jackson. At this point, it’s still unclear whether he will make his comeback in time for the Week 17 clash. However, even if he does, he probably isn’t going to be at his best, after being out of practice for nearly one whole month.

Picks: Los Angeles Rams to win and cover the spread; over to hit

Genting Singapore to Dissolve Its Subsidiaries in Japan