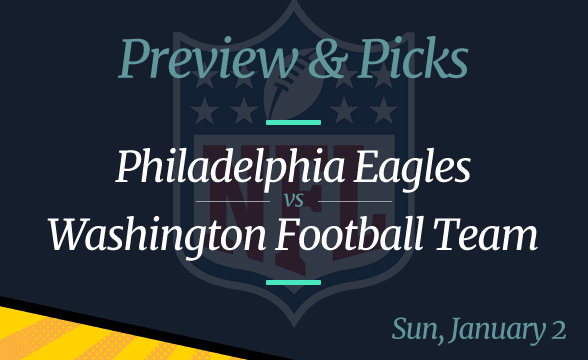 The Philadelphia Eagles are flying high in the NFC with an 8-7 record, which would be enough for them to qualify for the playoffs if the season ended now. However, there are two more games left for them to play, the first one being the Week 17 game against the Washington Football Team.

The WFT is still in the game for the playing, but they would need a perfect storm to actually get there. They know this, which is why their players probably aren’t going to be too motivated on Sunday. Of course, they surely aren’t going to surrender without a fight, especially because they would like nothing better than to see their NFC East foes go down in flames.

All odds are per FanDuel as of December 29.

A Win on Sunday Would Probably Mean Playoffs for the Eagles

Thanks to their superb run in December, the Eagles are now flying really high in the conference. They’re coming into Week 17 after three straight wins, which moved them all the way up to the #6 position in the NFC Rankings.

They have an 8-7 record, which is the same as the San Francisco 49ers who are just one spot below, but also in a position that grants a Wild Card entry to the postseason. Behind them are three teams with a 7-8 record.

What this means is that if Philadelphia wins on Sunday, its chances of making the playoffs will skyrocket. This goes especially because, in the final round of the regular season, the Eagles are playing against the Dallas Cowboys at home, a team that’s secured a postseason spot last week.

WFT Players Seem to Have No Motivation

Washington is coming into the penultimate week of the 2021-22 season following three straight losses. The most recent of those was the defeat to the Dallas Cowboys, their divisional rivals.

The Cowboys destroyed them 56-14, which was Washington’s heaviest defeat in years. Everything went wrong for the WFT in that game, both in the offense and in the defense.

Due to their horrible run in December, the WFT now has only a 6% chance of making the playoffs. For that to happen, they would need to beat the Eagles on Sunday, as well as the New York Giants in the final round. However, even that wouldn’t be enough if the teams sitting higher than them in the conference rankings do not fail.

The WFT players know this, which is why they probably don’t feel too motivated ahead of Week 17. Instead of giving their utmost and risking injuries, it’s likely that they’ve already given up on the postseason.