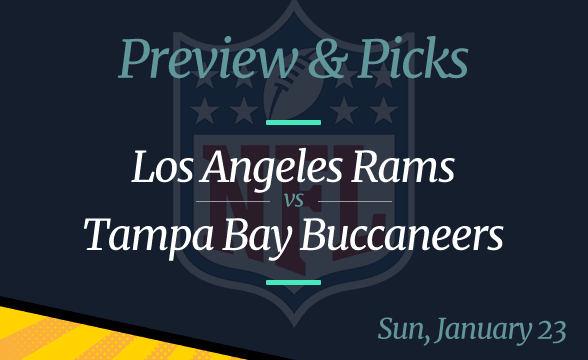 The winners of the last year’s Super Bowl, the Tampa Bay Buccaneers have come to the Divisional Round after defeating the Philadelphia Eagles in the Wild Card game. Their next obstacle on their road to defend the NFC title from last year comes in the form of the Los Angeles Rams.

The franchise from California is coming to Florida after defeating the Arizona Cardinals last weekend. Not only did they win, but they did it in style – destroying the opponents 34-11.

The win has certainly given the Rams a huge confidence boost. Still, that’s not enough to change the opinion of online bookmakers, who think the Bucs are the favorites.

All odds are per FanDuel as of January 19.

The Rams have been fantastic in the defense for years. No surprise there as they have such superstars on their defensive team as Aaron Donald, Jalen Ramsey, Leonard Floyd, and others.

This season, however, they’re also superb in the offense. The man who started the Rams’ offensive resurrection is their new quarterback, Matthew Stafford. After arriving in California from the Detroit Lions, the QB has been nothing short of sensational.

The best thing is that, after a few relatively disappointing weeks, Stafford has returned to his best. Last weekend, we saw him leading his team to a win in the Wild Card game, which was Stafford’s first-ever postseason victory.

In the game against Arizona, we saw him recording a quarterback rating of 154.5 – his second-best of the 2021-22 campaign.

He threw for two touchdowns and no interceptions in that game. One of those TD passes was caught by Stafford’s favorite target, receiver Cooper Kupp. The WR has been sensational this season, finishing the regular season with 16 TDs, which is more than any other player in the NFL.

All Eyes on Tom Brady

Two of the Bucs’ leading runners are out with injuries – Leonard Fournette and Ronald Jones, which means that we probably aren’t going to see them doing much rushing-wise. Instead, the Bucs will probably look for their chances through a passing game.

Luckily for them, they have a superb weapon on their hands in the form of quarterback Tom Brady. The 44-year-old finished the regular season as the NFL leader in passing yards, passing TDs, and pass completion.

The bad news is that they have some problems on the receiving end. Antonio Brown is no longer a Buc, while Mike Evans – the Bucs’ leader in receiving TDs – is still struggling with fitness. On the bright side, their leader in receiving yards, Chris Godwin, is fit and ready for Sunday’s game. Further, legendary tight end, Rob Gronkowski is playing top football at the moment.

All this means that the Bucs are likely to score a lot, but will that be enough for them to get a win? It should, especially knowing that the game is played on their turf, which is where they’re without a postseason loss in the Tom Brady era.

Picks: Tampa Bay Buccaneers to win and cover the spread; over to hit