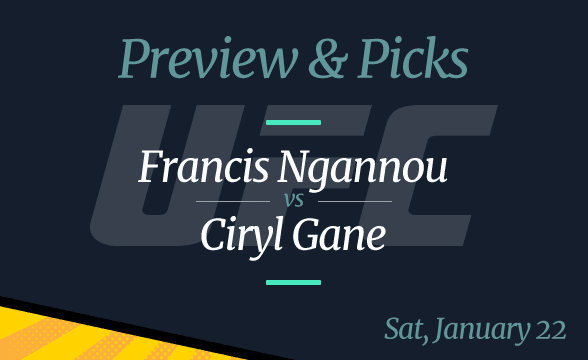 Francis Ngannou (16-3), the reigning UFC Heavyweight Champion, is defending his title this Saturday evening at the UFC 270 event at the Honda Center in Anaheim, CA. The challenger? His former sparring partner, Cyril Gane (10-0), who’s currently the interim champ.

Whoever wins this weekend’s mega-fight is going to become the undisputed UFC Heavyweight champ. So, who is it going to be?

All odds are per FanDuel as of January 19.

Ngannou Looking for Another KO Win

Francis Ngannou is famous for his one-shot power, which brought him 12 knockout wins in his professional career. In fact, only four of his 16 wins did not end by this method.

What’s best is that he’s on a sort of a KO streak, which saw him beating each of his previous five opponents by either knockout or technical knockout. The most recent of those wins happened last March when he knocked out Stipe Miocic, thus taking over the UFC Heavyweight Championship belt.

The last time Ngannou lost a fight was in July 2018, when Derrick Lewis defeated him by unanimous decision. Speaking of which, all of his three career losses happened by decision. Ngannou has never been defeated before the final bell, but maybe it’s time for that to end?

Can Gane Take Down Ngannou?

The two have never fought in the octagon, but they know each other very well. It’s because they used to train together in the past. What this means is that Ngannou knows Gane’s weaknesses and likewise.

That said, Gane is probably aware that the road to the victory at UFC 270 is not to try and knock Ngannou out. Instead, it’s to try and take him down.

The good news for Gane’s fans is that the fighter is technically superior to Ngannou, especially when it comes to grappling. Evidence of this is that three of his ten career wins happened this way.

Still, the most memorable moments from his career involved knockouts. The best example is the KO win against Derrick Lewis in August 2021, when he won the interim UFC Heavyweight Championship.

This time, however, it’s likely that Gane will not rush to try to KO his opponent. Instead, we’ll probably see him try and keep the distance. Playing cleverly can result in a win for the Frenchman, probably after the final bell.