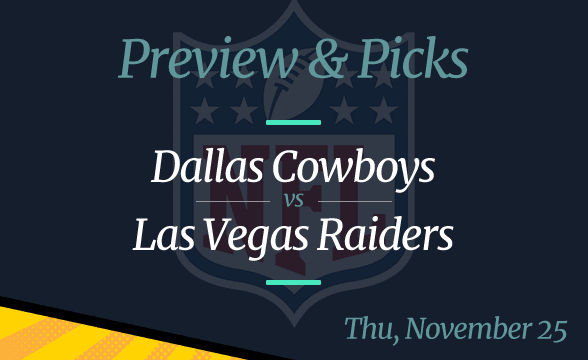 The Dallas Cowboys (7-3) are the only team in the NFC East that has a winning record. They did, however, lose last weekend to the Kansas City Chiefs on the road. A few days later, they’re back home at AT&T Stadium, where they will play against the Las Vegas Raiders on Thanksgiving.

The Raiders are at the bottom of the AFC West, but their battle for the playoffs still isn’t over. The trouble is that their recent run is pretty disappointing with three straight losses. Can they put an end to the losing streak? Betting odds suggest they can’t. Instead, the Cowboys are seen as a strong favorite.

All odds are per FanDuel as of November 22.

Raiders to Rebound After a Disappointing Loss?

On Sunday, we saw the Raiders losing to the Cincinnati Bengals 32-13 at home. Although Las Vegas wasn’t the betting favorite before the game, they were expected to do better. The Raiders needed a win to stay in the race for the playoffs.

They still have a decent chance to get there, but for that to happen, they will need to start winning again. Unfortunately for them, their schedule looks really ugly.

The biggest problem for the Raiders is that the chemistry in the locker room is far from good. Everything started when head coach Jon Gruden resigned following controversial email leaks. Then, one of the Raiders’ most productive receivers, Henry Ruggs III, got arrested after a DUI incident in which a woman lost her life.

Cowboys Looking for Their Fifth Home Win of the Season

Dallas is coming off a loss to Kansas City 19-9. That was their third loss of the season and their second in November. Although the Cowboys don’t have to worry about getting to the playoffs, they surely want to get back on the winning track.

The Thanksgiving game against the Raiders seems like an ideal opportunity for that. The Cowboys have better players and they play in front of their own fans. At AT&T Stadium, they’ve already won four games this season, while losing only one.

Thursday’s game, however, might not be a walk in the park as the Cowboys have some problems with absentees. The biggest problem is the absence of Amari Cooper, one of their most talented WRs. He had to sit out the Chiefs game after being placed on the COVID list.

On the bright side, the Cowboys have plenty of options to cover for him. This goes especially now that Michael Gallup is back after missing seven games due to an ankle injury.

Knowing all this, it’s only logical to assume we’re going to see Dallas winning on Thanksgiving. The Cowboys, however, might not do well enough to cover the spread.

Pick: Dallas Cowboys to win but not cover the spread; under should hit.