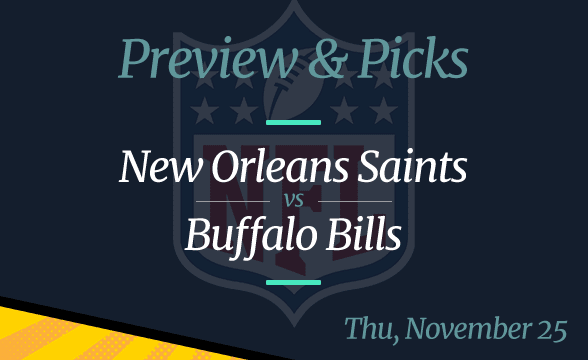 After losing three of their previous five games, the Buffalo Bills are no longer at the top of the AFC East. They could get back there in Week 12, but for that, they need to beat the New Orleans Saints at Superdome. That’s something they haven’t done since 1998, but on the bright side for Sean McDermott boys, the Saints are on a losing streak with three straight defeats.

The problem is that the Bills might not be in a good mood ahead of Thanksgiving, considering that they got blown out by the Indianapolis Colts last Sunday. Their offense looked anemic, while their defense had their worst outing in over a year, allowing 41 points.

All odds are per FanDuel as of November 22.

A Must-Win Game for Buffalo

The Bills started the season with a loss but then went on to win the next four games. That made them one of the top betting favorites for the Super Bowl LVI, while their quarterback, Josh Allen, entered the MVP race.

However, they then entered a period where they lost three out of five games, which caused them to drop from the #1 place in the divisional table. The worst of those defeats was the one that happened last Sunday when the Colts demolished them 41-15.

Despite the blowout loss, the Bills’ defense remains one of the best in the league. Actually, with 17.6 points conceded per game, they have the second-best average – just behind the New England Patriots with 16.1.

Beating the Saints is a must for the bills if they wish to stay in the race for the divisional title. The thing is that they have just one win fewer than the Patriots, the team they’re taking on in Week 13.

Taysom Hill To Return for the Saints

The Saints lost their previous three games, despite being the betting favorite in two of those. One of the reasons behind this is that Trevor Siemian played as their QB in the absence of Taysom Hill. In those three games, he threw for a total of seven touchdowns, while two of his passes were intercepted. On top of that, he got sacked five times.

Perhaps Siemian isn’t entirely to blame for all this, but he’ll probably have to make way for Hill once he fully recovers from an injury. The good news is that Hill could make a return in time for the Thanksgiving game, which should make the Saints more dangerous in the offense.

Still, to be fair, their offense wasn’t too bad in the previous three games. The defense, on the other hand, was dreadful, with 30.0 points against them on average over that period. That’s not something you’d expect from a team with playoff ambitions.

That said, they will probably fix some problems in their defense, but that probably isn’t going to be enough to get a win on Thanksgiving. Instead, it’s very likely the Bills will be the ones to celebrate after the game.

Picks: Buffalo Bills to win and cover the spread; under should hit.