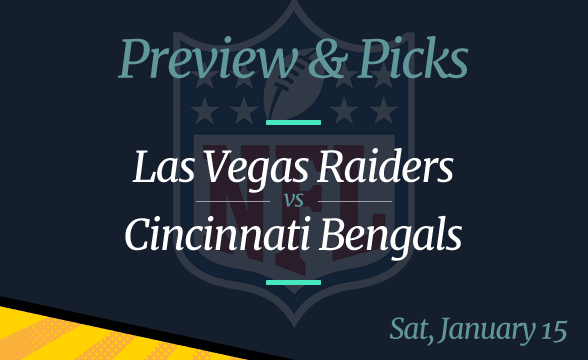 On Sunday evening, the Las Vegas Raiders booked themselves the ticket to the postseason by defeating the Los Angeles Chargers in overtime. As a result, they’re now taking on the Cincinnati Bengals in the Wild Card playoffs.

For the Raiders, this is going to be a short week, as they don’t have much time to prepare for Saturday’s clash. It’s a bit different situation when it comes to the Bengals, who booked their playoff ticket two weeks ago. This is why their coach Zac Taylor had the luxury to give a day off to some of his key men in the final week of the regular season, most notably, their in-form quarterback, Joe Burrow.

All odds are per FanDuel as of January 11.

The Raiders must feel good about themselves after making the playoffs in such a thrilling manner. After a horrible run that started in November and saw the Vegas franchise lose five of their six games, the Raiders managed to bounce back.

The most impressive thing about the Raiders’ run is that each team they defeated in the past four weeks had postseason ambitions at the time. What’s not too impressive is that the Raiders won each of those games by a margin of no more than three points.

Bengals are Ready for the Playoffs

The Bengals secured the AFC North title in Week 17 after beating the Kansas City Chiefs. This is why their coach Taylor decided to give a rest to some of his crucial players in Week 18. For example, their starting quarterback Joe Burrow was replaced by backup Brandon Allen.

This explains why the Bengals ended up losing to the Cleveland Browns in their final game of the regular season. Still, despite losing, they didn’t embarrass themselves. In fact, the final score of 21-16 shows that the Bengals’ backups put on a good show that day.

That said, their players are probably feeling really good about their chances in the Wild Card playoffs. They’re well-rested and well-prepared to take on the Raiders, which should be enough for them to grab a win.

Picks: Cincinnati Bengals to win and cover the spread; over 49.5 to hit