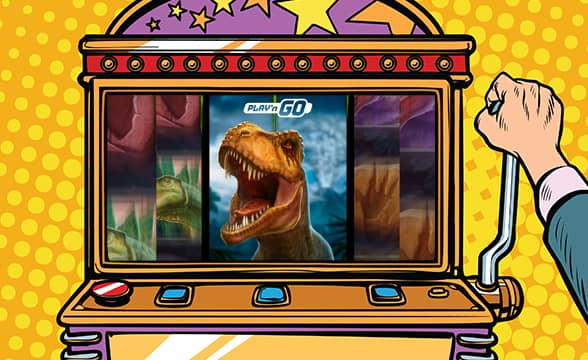 Raging Rex has become one of the signature games for Play’n Go over the past years. Exciting fan bases from all over the world, who clearly have a soft spot for murderous dinosaurs and apex predators, the franchise is back with a worthy sequel – Raging Rex 2. In this game, the timeline has moved on and Raging Rex is now followed by a patch of hatchlings who are just as hungry and on the hunt.

The game has been updated both graphically and in terms of gameplay to bring you even more winning opportunities. The gameplay offers Dynamic Payways which has become the studio’s signature feature, and the game definitely doesn’t disappoint. There is a six-by-four grid to enjoy along with 4096 possible ways for players to win. To add suspense and huge winning potential, the slot also features a 30,000x multiplier calculated on your base bet.

Things get even more worthwhile when you unlock the Free Spin features, of which there are three. They include the Primal Fury, Hatchling Mania, and Jurassic Mayhem. More choices incorporated in the game means that you can choose which way the gameplay is steered.

Clearly, Raging Rex 2 is a continuation of its predecessor, but it has made sure to spin the original gameplay in a way that is highly pleasing and rewarding. The 3D aesthetics are spot-on and you will have no trouble wanting to play more once you start. There is no need to spend real money as the game is available in a demo mode.

The real money features clearly add something to the gameplay, and make the Walking Wild feature even more worthwhile. This mechanic is particularly generous as it means that you will be able to trigger free spins and enjoy even more wins.

Raging Rex 2 Is All It Needs to Be

Commenting on this release, Play’n Go head of games Charlotte Miliziano said that Raging Rex 2 is everything that players have come to expect from the game. Multipliers, even more, dynamic payways, and great 3D animations define the experience here. Miliziano added:

“With the resurgence of a certain dinosaur-themed franchise in the cinemas what’s to say that a Raging Rex trilogy isn’t on the horizon.”

The studio has been ramping up its production efforts in recent weeks with the company releasing a number of fresh titles over the past few months. Those include Secret of Dead, Freaya’s Wedding, Safari of Wealth, and Fat Frankies.

Ireland Continues Looking for a CEO of Its Upcoming Gambling Authority

Tim Drehkoff to Replace Greg Chaplin as Rush Street CEO, Effective on May 1

Wazdan Is Going Back to the Basics With Retro Hot Slot: 777 Crown