The Oklahoma Supreme Court issued a ruling yesterday stating that the two gaming compacts which St.Gov. Kevin Stitt signed with the Comanche Nation and the Otoe-Missouria Tribe, are invalid under Oklahoma law.

The 2 controversial compact deals were signed by the governor in April, in search of more revenue for the state. Gov. Stitt allowed the Otoe-Missouria Tribe and the Comanche Nation to expand on their gambling operations by building up to 3 new casinos each and providing Class III gaming, including sports betting.

The deals caused a huge rift among the tribes in Oklahoma, with both tribes being suspended by the Oklahoma Indian Gaming Association. The compacts met opposition from Oklahoma Attorney General Mike Hunter, who opined the governor had no legal grounds for authorizing an activity that is yet to be legalized by the state, asking the US Department of Interior (DOI) to reject the deals since the provisions for sports betting in them violate state law.

Last month DOI decided to let the 2 compacts come into effect without taking action, bringing more controversy rather than clarity regarding tribal compacts in the state, but now the Supreme Court voted 7-1 to reject the compacts. The court ruling stated the deals cannot be deemed legal as they include games that have not yet been approved in the state.

“…the state of Oklahoma is not and cannot be legally bound by these compacts until such time as the Legislature enacts laws to allow the specific class III gaming at issue, and in turn, allowing the Governor to negotiate additional revenue.”

State Attorney General Mike Hunter praised the court for its decision to reject the compacts, appreciating the effort to carefully look into the matter and to come to an apt conclusion.

“The Supreme Court affirmed what my office has opined, and the pro tem of the Senate and the speaker of the House of Representatives have argued all along, the governor lacks the authority to enter into and bind the state to compacts with Indian tribes that authorize gaming activity prohibited by state law.”

Unlike the state AG, the Chairman of the Otoe-Missouria Tribe, John R. Shotton, was not satisfied with the Supreme Court ruling and issued a statement expressing his view that the court had no jurisdiction to invalidate a compact deal that is legal by state and federal law.

“…We have said all along we do not plan to offer house-banked card and table games and event wagering until they are authorized by state law. Indeed, this condition was part of the compact, and it was unfortunately overlooked by the Court. We will continue to operate under the remaining terms of our compact pursuant to the severability clause of the compact, and we will refrain from operating any game that is not authorized under state law.”

Oklahoma Governor Kevin Stitt who is still entangled in legal battles with some of the tribes regarding the automatic renewal of their compacts signed two more compact deals earlier in July. Stitt agreed with United Keetoowah Band of Cherokee Indians (UKB) and Kialegee Tribal Town (KTT) to allow them to offer Class III gaming, but both deals do not include provisions for sports betting. 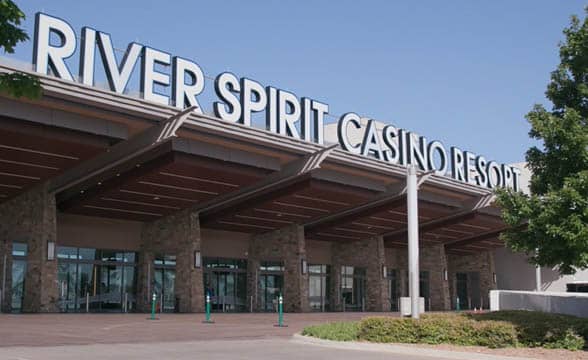 AI specialist Oosto has inked a new agreement with Muscogee Nation Gaming Enterprises, agreeing to power the latter’s River Spirit Casino Resort property in Oklahoma with facial recognition software. The tribal venue has thousands of visitors a day and will greatly benefit from the new solution. Oosto to Help River Spirit Prevent Crime The facial […]

Oklahoma Tribes Want Gov. Stitt Out of Office in the Upcoming Elections

Oklahoma is traditionally a GOP bastion. The past 20 years have always been won by the Republican Party with around 60% of the votes, and while the Sooner State has a good democratic bastion too, it has hardly been enough to tip the scales in favor of the Democratic Party. This may be finally changing […]

A committee in Oklahoma’s House of Representatives has passed a bill to allow sports betting in state casinos. The bill was approved by the committee on Monday, and will now move to the full House for what is almost certainly going to be a convoluted debate. OK Committee Says OK To Sports Betting House Bill […]

Oklahoma-based premier gaming entertainment venue Choctaw Casinos & Resorts has recently sealed the deal for a four-year partnership with Professional Golfers’ Association (PGA) Tour Champions. As part of the deal, the Indian casino operator will become the presenting sponsor of the ClubCorp Classic event that will reunite the most prestigious PGA Tour Champions with celebrities […]

Oklahoma sports fans may soon start enjoying in-person sports betting experiences through existing tribes. Ken Luttrell is a Republican in Ponca City who recently filed House Bill 3008 in an attempt to pin Oklahoma on the map of the 30 states that have already embraced sports betting.  Oklahoma Would Cash in $240 Million a Year  […]

Connecticut is on the verge of becoming the latest state in the US to introduce its own legal sports betting market. The puzzle is almost completely put together, with one key signature still needed. The Department of the Interior (DOI) has to approve newly-crafted tribal gaming compacts between Connecticut and its two tribes, the Mohegan […]

Choctaw Casino & Resort from Oklahoma opened its massive hotel and gaming floor facility addition earlier this month, which was worth around $600 million. The gaming property is 14 miles from the Texas border and it is seen as a way to draw North Texans players. Additionally, Choctaw is just an 88-mile drive from Dallas. […]

In spite of multiple attempts to derail the effort, Florida’s legalized sports betting market is now only inches from the finish line. The federal government’s Bureau of Indian Affairs (BIA) had 45 days to approve the state’s gaming compact with the Seminole Tribe of Florida and has allowed that window to close with no response. […]

Now that three more states have legalized sports betting, sportsbooks will be soon available in more than half of the US states. The market is rapidly expanding following the revoke of the PASPA law, which granted US states the authority to decide on the regulation of wagering. The topic is gaining momentum in Oklahoma and […]

A casino project in Biloxi suffered a major setback Thursday after the Mississippi Supreme Court upheld the lower court ruling that the proposed site does not meet state requirements for a casino site. Casino Development Legally Stalled The proposed casino resort comprising of a 1,300-room hotel and 100,000 square feet conference center at the site […]