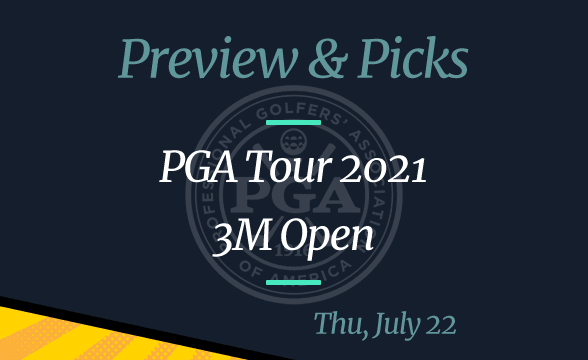 3M is a fairly new competition on the PGA Tour, tоо, with the event heading for its third edition this week. While Morikawa will not be attending, the event has managed to draw some of the best golfers in the world, including Patrick Reed, Dustin Johnson, and Matthew Wolff, who all seem to be returning, and not least – Wolff sporting a title to his name.

Johnson is once again in the lead, right after Jon Rahm, who seems to be given the biggest chance of success at the upcoming 3M Open, leading the way at (+750), trailed by Louis Oosthuizen at (+1400). The event has a $6.6 million prize purse.

Johnson is once again leading the pack, citing his most recent performance in the current PGA Tour series. He has known a few rough patches most recently, finishing T48 at the Valspar Championship and missing the cut at the PGA Championship in May.

However, things have been much better for him from there on in. He ended up T10 at the Palmetto Championships, and he ended up T8 in The Open. His chances of winning the 3M Open are remarkably high given this performance.

To dismiss Johnson when sportsbooks seem to throw their weight behind him would also be shortsighted.

Where and When Is 3M Open?

Where to Watch 3M Open?

You can watch the 3M Open on either Golf Channel or CBS. The event will run from Thursday through Sunday.

Who Has Won the Event Before?

Will Matthew Wolff Make a Return?

Two times winners at the same course are not too much of a rarity, but golf is an incredibly competitive game, and that means there are many people swinging for the same trophy as the rest of the field.

Matthew Wolff is posted at (+2800) in the current ranking in terms of odds, but he already holds the 2019 title. He didn’t do half bad in the 2020 ranking as well, posting T12. Granted, it was a slump from winning a year earlier, but then again, his performance didn’t really worsen too much.

The best way to gauge his current form would be by taking a look at his most recent performance. Wolff failed to make his mark on the WGC-Mexico Championship and the Masters.

He did finish T15 in the US Open, though, but ended up T58 in Rocket Mortgage Classic. Should you still root for him? That’s a tough call. Wolff has the experience to make TPC Twin Cities Course work for him, but there are no promises.

The UK Has Finally Lifted All COVID-19 Restrictions