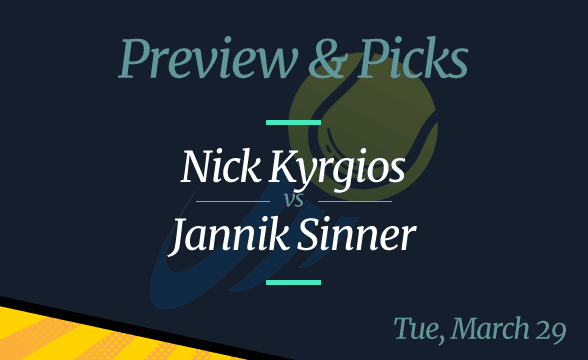 On Tuesday, March 29, tennis fans will have the pleasure to watch match matches of the Round of 16 of the 2022 Miami Open. One of the most interesting duels of the round is the clash between Nick Kyrgios and Jannik Sinner. Why? Because ATP #102 Kyrgios is seen as the betting favorite against #11 Sinner.

Are bookmakers right to think the Australian player is going to beat the highest-ranked Italian? That’s the question we’ll try to answer in this preview.

What Makes Kyrgios the Betting Favorite?

With the odds of -175, Kyrgios is expected to beat his Italian rival without any problems. Still, knowing that the Aussie is ranked much lower than his next opponent, one has every right to question the bookies’ decision to make him the favorite.

So, what’s going on there? Well, there are several reasons, starting with the fact that Kyrgios has been playing fantastic tennis in 2022. The 26-year-old is 7-2 this year, with his losses happening to Daniil Medvedev (the ATP #2) and Rafael Nadal (#3).

Further, Kyrgios has been great at the Hard Rock Stadium this year, with three wins all in straight sets. One final advantage over Sinner is that he’s been in much better shape physically than his opponent. As a reminder, their first-ever duel was supposed to happen at the 2022 Indian Wells, but Sinner surrendered the match due to an illness. Thirteen days later, it’s time for the two to finally meet.

Sinner’s Been Struggling This March

The 20-year-old Italian sensation came to Miami as the #9 seed. Ahead of the tournament, he was seen as a potential dark horse for winning the title with the odds of +2500. After winning the two matches, you’d assume that his odds would shorten significantly. However, they only moved to +2000. This is strange, especially knowing that the odds on Kyrgios are as short as +650.

If you’re wondering why Sinner isn’t a stronger favorite, it’s because he hasn’t been impressive at the 2022 Miami Open – he dropped a set in each of his two matches in Miami Gardens.

In Round 1, we saw him beat ATP #71 Emil Ruusuvuori 2-1 after spending 2:42 hours on the court. The same result was in his second match, in which he played Pablo Carreno-Busta (#19). That match lasted for three hours and 13 minutes.

Who’s getting to the quarterfinals of the 2022 Miami Open, Nick Kyrgios or Jannik Sinner? Odds suggest it’s going to be Kyrgios, but Sinner mustn’t be underestimated. Sure, he might feel jaded, but the mere fact that he’s sitting in the #11 place in the ATP Rankings means that the youngster needs to be taken seriously.