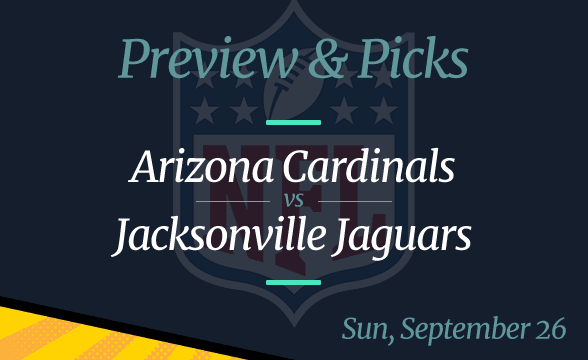 The Cardinals are coming to Jacksonville hopeful of extending their winning streak to three games. The Jaguars, on the other hand, are still without a win in the 2021 NFL season.

All odds are per DraftKings as of September 22.

What to Expect from Arizona’s Defense?

The big question ahead of the Cardinals vs Jaguars game is what to expect from their defenses. Sure, it seems very likely that the Jacksonville defense isn’t going to do much against early MVP candidate and quarterback Kyler Murray and his offense. What’s not clear is how Arizona’s defense will perform on Sunday.

They were fantastic in Week 1 against the Tennessee Titans, preventing Derick Henry, Julio Jones, Ryan Tannehill and others from doing much. In fact, the Titans scored only 13 points in that game. However, in Week 2 against the Minnesota Vikings, they weren’t as impressive. Playing in front of their own crown at State Farm Stadium, Arizona’s defense conceded 33 points.

The Cardinals need to consider themselves lucky for not losing that game, considering that Minnesota’s placekicker had a chance to bring score a three-pointer just a few seconds before the end. Luckily for Arizona, Greg Joseph missed a 37-yard field goal. However, If they want to keep winning, the Cardinals mustn’t let things like that happen in the future.

Can the Jaguars Grab Their First Win of the Season?

Jacksonville’s defense has been horrible so far, with 60 points conceded in two games. That makes them the fourth-worst defense in the AFC at the moment.

It’s almost certain that their defensive stats will not improve in the game against the Cardinals. After all, Arizona’s offense has been tremendous thus far. Murray has been sensational, both in terms of passing and rushing.

The Jaguars defense (especially linebacker Myles Jack) might be able to prevent the opposition QB from making too many rushes. However, Jacksonville’s secondaries seem to be in trouble. Murray looks more than capable of slicing them apart with his precise passes.

What all this means is that if the Jaguars wish to win this game, their offense will have to step up. The man in the spotlight is their rookie quarterback, Trevor Lawrence. He did have a decent game in Week 1, but in the second game of the season, we didn’t see much from him.

Sure, he’s a great passer of the ball, but his teammates just aren’t great. They just don’t seem capable of breaking Arizona’s defense, even if they end up making as many mistakes as they did last weekend.

Prediction: Arizona Cardinals to win and cover the spread. The Over seems an appropriate target, given the way these two teams are playing.

The NFL is entering a completely new era, as are all sports leagues around the world. Despite their intrinsic connection, sports and sports betting have been forced to maintain their distance for decades, but not anymore. Sports leagues and teams are constantly partnering with sportsbooks in the new sports betting paradigm, and the Arizona Cardinals […]