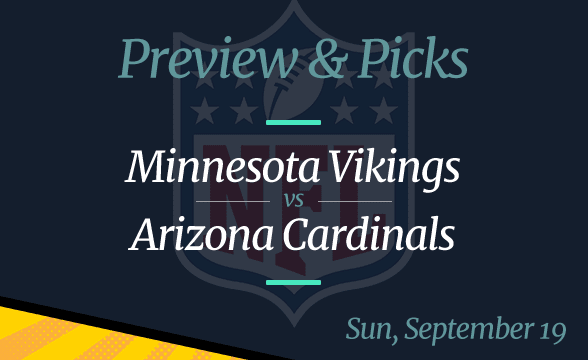 The bad news for the Arizona Cardinals is that they’re competing in the NFC West, probably the toughest division in the NFL. The good news for this team is that it has started its 2021 campaign in top gear. In Week 1, we saw the Cards outplay the favored Titans in Tennessee, winning the game 38-13.

Can the Cardinals continue winning? They’re welcoming the Minnesota Vikings in Week 2 and odds suggest they’re going to grab their second straight win.

All odds are per MyBookie as of September 15.

The Right Time for Kyler Murray to Shine

In his first season as the Cardinals quarterback, Kyler Murray won the 2019 NFL Offensive Rookie of the year award. As a sophomore, he improved his stats even more, but that wasn’t enough to take his team to the postseason – Arizona went 8-8 in the regular season.

Now, in his third year at the NFL, Murray seems like he could take a big leap forward. In Week 1, we saw him going 21-32 for 289 yards, making four touchdown passes along the way. On top of that, the double-threat QB showed his rushing prowess, taking the ball over the TD line on his own once.

His team hasn’t been in the playoffs since the 2015-16 season, but now they look like a team that could end the drought. Apart from Murray, Arizona has plenty of superb players on the roster in 2020.

Their defense looks much stronger than before, as evident from the fact that they conceded only 13 points against Tennessee, which is one of the best offensive teams in the NFL.

Can Minnesota Cause a Surprise?

The Vikings were favored to beat the Cincinnati Bengals in Week 1, but ended up losing by three points in overtime. After being down throughout the entire game, Vikings placekicker Greg Joseph scored three points in the last second of regular time.

They had the momentum, but the Bengals outplayed them in the overtime. As a result, the Vikings are now 0-1, and are coming to Arizona as underdogs.

In the past nine meetings between these two, the host won each time. This time, the game is taking place at State Farm Stadium, where the home team will have huge support from the stands. Can Minnesota ruin the party for them?

Probably not. Even though the Vikings are far from a bad team, their next opponent just needs to win this game. The thing is that Arizona has to play two games against each of its three divisional opponents – LA Rams, Seattle Seahawks and San Francisco 49ers.

As winning against those opponents is going to be hard, the Cardinals need to make sure to win against other of their 2021 opponents. That said, beating the Vikings is a must.

Pick: Cardinals to win and cover the spread; we should see over 51 points, as well.

MaximBet Gets Access to Ohio and Pennsylvania as It Scales Up