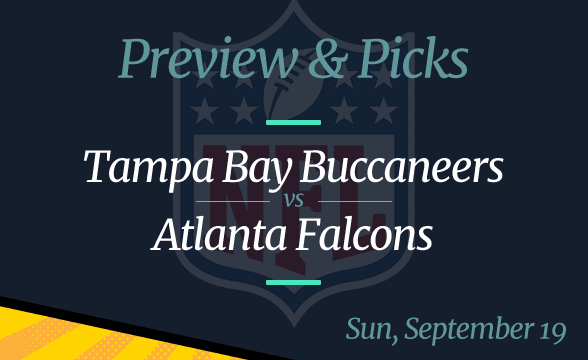 Placekicker Ryan Succop brought the Tampa Bay Buccaneers the win over the Dallas Cowboys in Week 1, with three points scored just two seconds before the end of the game. It’s surprising that the reigning champs had to work so hard to get the victory. Are they going to struggle in Week 2, as well?

Judging by what we’ve seen so far from their next opponent, the Bucs should have no problems. As a reminder, the Atlanta Falcons suffered a blowout 32-6 defeat in Week 1 against the Philadelphia Eagles.

All odds are per MyBookie as of September 15.

Tampa’s Defense Needs to Do Better

The Bucs conceded 29 points against the Cowboys in Week 1, which is way below their standards. In fact, in 2020, Tampa allowed 29+ points only on three occasions in the 16 regular-season games.

Sure, Dallas’ QB Dak Prescott had a wonderful game, but the Bucs’ defense probably feels as if they could’ve done better.

It’s a similar case when it comes to their offense, even though Tom Brady was superb in Week 1. The 44-year-old went 32/52 for 379 yards and four touchdowns. Two of his TD passes were caught by Gronk, while Antonio Brown and Chris Godwin scored one TD each.

Should we expect the same from Brady? Probably, as he seems to love playing against the Falcons. Last season, in Week 17, the Bucs beat the Falcons 44-27 in Florida, with Brady passing for four touchdowns.

The Falcons haven’t won a game since November and are currently on a losing streak of nine straight games. Their most recent defeat was to the Philadelphia Eagles, who entered the game as underdogs.

The Week 1 game against Philadelphia was Atlanta’s first game as Arthur Smith as their head coach. The 38-year-old has never been in this position before; in his career, Smith mostly worked as an assistant. His most recent job was at Tennessee, where he served as the Titans offensive coordinator.

With experience in coaching the offensive team, many expected the Falcons were going to score a lot in Week 1. However, just the opposite happened. They scored only 6 points against the Eagles, the second-worst score of all the NFL teams in Week 1.

Knowing all this, it’s only reasonable to assume the Falcons are heading into a disaster. Tampa is motivated to get a big win on Sunday to say sorry to the fans for putting them through a lot of stress in Week 1.

Pick: Tampa Bay Buccaneers to win and cover the spread; the Over hits.

Greentube Debuts in the US via GNOG Partnership in New Jersey