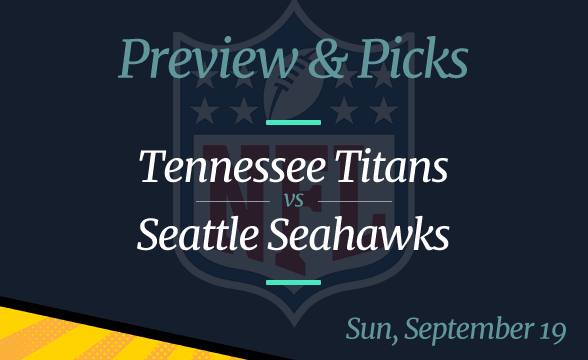 Derrick Henry, A. J. Brown, Julio Jones and even Ryan Tannehill – with such players on the offense, you’d expect the Tennessee Titans to score 30+ points in every single game. However, they didn’t start the 2021 season that way.

In fact, in Week 1, the Titans lost to the Arizona Cardinals 13-38 at home. In Week 2, they travel to Seattle to take on the Seahawks, and their fans worry the team could go 0-2. Should they be worried? Let’s see!

All odds are per DraftKings as of September 16.

What Happened to Tennessee’s Offense in Week 1?

Tennessee’s quarterback might not be the best in the NFL, but Tannehill is definitely in the group of elite players. Last season, the guy made 33 touchdown passes, which means something. What it means is that he’s a great passer; it also means that he has great WRs to aim his passes at.

Last season, Brown was Tannehill’s favorite target; this season, he’ll also have Julio Jones ready to catch his throws. Then, there’s also Henry, who’s arguably the best rusher in the league. Evidence of this is the fact that oddsmakers see him as the #1 favorite to be the NFL’s reception leader in 2021.

With such players in the offense, it’s really strange that the Titans scored only 13 points in Week 1. Some fans are blaming the new offensive coordinator, Todd Downing. He got appointed in the offseason after Arthur Smith left for the Atlanta Falcons to become their new head coach.

Online sportsbooks think so. However, we need to call for caution. The Seahawks did win dominantly in Week 1 against the Colts, but it wasn’t only because they played well. It’s also because Indianapolis players were very bad.

The Colts offensive line was dreadful in that game, letting the Seahawks defense stop Carson Wentz from doing almost anything. The Indianapolis defense was even worse, allowing Seattle’s quarterback to make four touchdown passes.

Russell Wilson was really impressive, as usual. He’s expected to continue playing at the same level or, perhaps, even improve his stats? The reason is that he’ll be facing the Titans, a team whose offense isn’t great. In fact, one could argue that the Colts defense is much better than the one of the Titans.

What all this practically means is that the winner of the Titans vs Seahawks game will be the team that scores more. So, who will outscore who?

It’s going to be close, but the Seahawks should be able to get a win.

Pick: Seahawks to win but probably not to cover the spread. That makes it difficult to expect a high-scoring game, and the Under is likely to hit.

Esports betting platform and media company Rivalry announced today a new addition to its Board of Directors, Kirstine Stewart, to assist the company’s ambitions to grow into international markets. Key Addition to the Board The election of Stewart to the Board of Directors of Rivalry was approved by the company’s shareholders at their most recent […]

Caesars Entertainment is teaming up with the company that produces Las Vegas’ “Absinthe” on a project that costs $75 million and includes theaters and dining rooms in three cities. The company, which recently announced a multi-million-dollar makeup project on Caesars Palace, shared the news via the Associated Press on Thursday. It stated that it teamed […]

The Fontainebleau in Las Vegas is having a difficult time finding solid ground. The project was initially begun 14 years ago before taking a break due to the economic crash in 2008 and 2009, which led to its bankruptcy. It was then picked up again and resold a couple of times before ending up in […]

Some casinos are still getting scammed by some of the oldest tricks in the book. Five casinos in Atlantic City were reportedly target by a gang of crooks out of New York City, who managed to cash bogus checks at the properties in exchange for gambling chips. In total, the quintet of crooks managed to […]