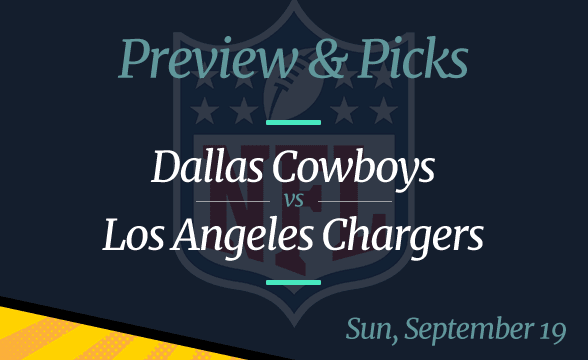 Both teams put on a really impressive performance in Week 1. The Dallas Cowboys lost to the Super Bowl LV winners, but that happened just a few seconds before the match. Meanwhile, the LA Chargers beat the WFT in Landover.

All odds are per DraftKings as of September 16.

First Chargers Game with Fans in the Stands of SoFi Stadium

The Chargers (and their local rivals, the Rams) started using the world’s most expensive stadium in 2020. However, COVID-19 got involved last season, making both teams play their home games in front of empty stands of SoFi Stadium.

The good news is that fans are back! The first time the Chargers will host a SoFi game with fans in attendance is the one scheduled for Sunday, when the Cowboys come to LA.

They will have the fan support, but will that be enough for the Chargers to grab a win? Not necessarily. Even though they did win in Week 1, the fact is that they don’t belong in the NFL elite.

As a reminder, in their first game of the 2021 season, the Chargers beat the WFT 20-16. A possible explanation for this is that Washington’s starting quarterback, Ryan Fitzpatrick, injured his hip in the second quarter.

Even though replacement Taylor Heinicke did a fine job, the fact is that the WFT weren’t as dangerous as they could’ve been.

The Chargers defense managed to outsmart the WFT offense. Can they do the same against the Cowboys? Probably not, as Dallas’ starting quarterback has made a comeback. After missing most of the 2020 season, Prescott made a return in the NFL Kick-Off Game. The Bucs beat them, but the Cowboys had a lead through that game.

Led by Prescott, the Cowboys offense was superb, scoring a total of 29 points. Their defense, however, wasn’t that good – they conceded 31 points.

Prescott was nothing of amazing in that game, completing 42 of 58 passes for 403 yards. He made three touchdown passes, with one interception. That’s a heck of an achievement knowing that he and his buddies were playing against one of the league’s best defenses.

In Week 2, Prescott and Co. are playing squaring off against mediocre defense. Sure, it’s been a while since the Chargers last conceded over 30 points (December 6, 2020), but that might change soon. In fact, we could see them getting hammered by the Cowboys on Sunday evening.

Pick: Dallas Cowboys to win and cover the spread; the game goes over 55 points.

Pennsylvania casinos are in for a celebration as September 2021 has proved to be far better than September 2020 as the total generated revenue by all of the gambling facilities, as reported by the state’s regulators for this month, is $415.6 million. That is a 46% increase than September 2020, which equals $130 million higher […]

Put simply, 2020 sucked for the gaming industry. With COVID-19 forcing lengthy shutdowns of commercial activity everywhere, casinos took a major hit that is still being felt today. The good news, though, is that things are returning to a quasi-normal state in most areas, and Las Vegas, the US gambling capital, is on the road […]

NBA Chooses TAB as Its Official Wagering Partner in Australia

The parent company behind online sports betting brand Betway and multi-brand online casino Spin, Super Group, continued to expand into markets in the US, launching in its fifth jurisdiction. Super Group also received a new operating license in Europe. Launch in Iowa, License in Poland Continuing to execute on its strategy to bring its leading […]