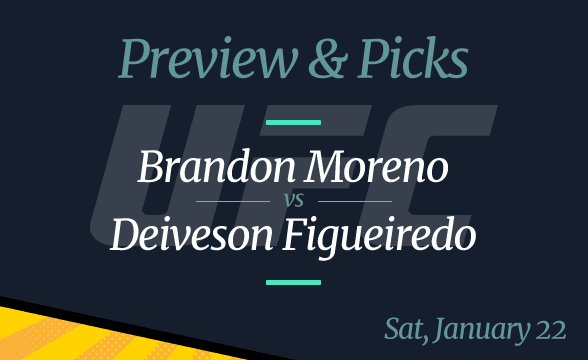 Brandon Moreno vs Deiveson Figueiredo Part 3 is on the program this Saturday evening at UFC 270. Their first fight ended in a draw, while in the second bout, challenger Moreno beat the then-champ by submission, taking over the UFC Flyweight Championship belt.

Figueiredo now has a chance to reclaim the title he lost last June. However, oddsmakers don’t think he’s going to pull it off. Instead, they see the reigning champ as the favorite.

All odds are per FanDuel as of January 21.

Brandon Moreno Not Letting Go of His Championship Belt

In June 2021, Moreno became the first Mexican to hold a UFC title. He did it by defeating his Brazilian foe, Figueiredo. That was Moreno’s 19 win in his professional career, in which he also lost five fights. All of his losses happened by decision.

When it comes to his wins, a majority of them happened by submission. In fact, out of his 19 wins, 11 happened by this method. That’s the method by which he defeated Figueiredo in their second fight.

Can he do it again? Perhaps, although it’s very likely he’s not going to be willing to risk much. After all, his opponent isn’t bad on the floor, while he’s also pretty decent punching-wise.

That said, Moreno’s best chance of retaining the title is in fighting smart. Rather than rushing to submit his opponent early on, we could see him stay cautious and try to beat him by points.

Before losing to Moreno, the Brazilian had just one loss in his portfolio. The defeat in question happened in March 2019 when he lost to Jussier Formiga by unanimous decision. He bounced back after the loss pretty quickly and was given a title shot the next year.

Unfortunately for him, he missed the weight in the title bout against Joseph Benavidez. The result was that, despite winning by TKO, he didn’t get the title. Instead, the two had to go in the octagon again a few months later.

It was July 2020 when they locked horns for the second time and Figueiredo won again. This time, he did it by technical submission.

The same year, we saw him make his first title defense by beating Alex Perez in November 2020. Then, just a couple of weeks later, he fought Moreno for the first time.

The fight finished in a draw, which meant the title stayed in his possession. However, six months later, Moreno managed to take the title from him. It happened more than seven months ago, meaning that Figueiredo has had plenty of time to prepare for the Moreno vs Figueiredo 3.