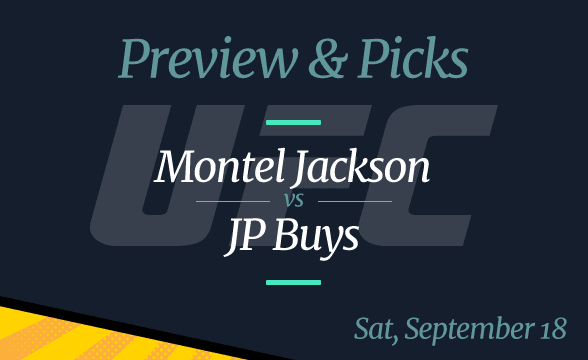 We are stoked about the upcoming UFC Vegas 37 event as the Ultimate Fighting Championship has once again made sure to shortlist dozens of distinct fighters who will bring their A-game to the octagon at the UFC Apex in Las Vegas, Nevada this Saturday, September 18.

One of the preliminary card fights to keep your eyes peeled for is the bout between Montel Jackson and JP Buys. Posted at (-650), Jackson seems locked to be a winner whereas Buys will be taking up the role of an underdog in the clash. Already hardened in the UFC, Montel has a tremendous advantage over his opponent, but we should not dismiss Buys just yet.

Where and When Is Vegas 37 Jackson vs Buys

As part of the Vegas 37 Smith vs Spann event, the fight between Jackson and Buys is taking place on Saturday, September 18 at the UFC Apex in Las Vegas, Nevada.

Tale of the Tape Jackson vs Buys

UFC Has Been Unkind to JP Buys

JP Buys is not a fighter whom you should underestimate. With an overall track record of 9-3-0, he has posted some great results. The trouble here is Buys is a bit of a UFC outsider. He debuted in 2017 and has had three finishes, two of which resulted in a loss. His only hard-fought win is against Jacob Silva who is another middling fighter at best.

Buys though has a grout grappling technique which could give him the upper hand in a close fight. Yet, with too little data to go on now, the bookmakers have Buys’ performance at (+475).

Jackson Is a Rising Star in the UFC

Jackson’s overall record isn’t too different with ten wins and two losses. The difference here is that he has fought exclusively in the UFC which gives him a solid foothold in the promotion so far. In fact, Jackson has stacked up quite a few wins. He has only lost twice since he started fighting with a total of seven finishes.

His last fight against Jesse Strader was a success, completing it in 1:58. But even when he lost to Brett Johns before that in July 2020, Jackson went the distance for a fight-minute fight that was won by Unanimous Decision. He is not too rushed to bring in a win which is fine, but he has the qualities to outlast JP Buys in this one.

The only way Buys might win here is if he throws a surprise upset via KO/TKO which would be much unexpected. This fight should however finish within 2 rounds if you are interested in the totals. For the moneyline, we would suggest sticking with Jackson if you see any value in that.

Esports betting platform and media company Rivalry announced today a new addition to its Board of Directors, Kirstine Stewart, to assist the company’s ambitions to grow into international markets. Key Addition to the Board The election of Stewart to the Board of Directors of Rivalry was approved by the company’s shareholders at their most recent […]

Caesars Entertainment is teaming up with the company that produces Las Vegas’ “Absinthe” on a project that costs $75 million and includes theaters and dining rooms in three cities. The company, which recently announced a multi-million-dollar makeup project on Caesars Palace, shared the news via the Associated Press on Thursday. It stated that it teamed […]

The Fontainebleau in Las Vegas is having a difficult time finding solid ground. The project was initially begun 14 years ago before taking a break due to the economic crash in 2008 and 2009, which led to its bankruptcy. It was then picked up again and resold a couple of times before ending up in […]

Some casinos are still getting scammed by some of the oldest tricks in the book. Five casinos in Atlantic City were reportedly target by a gang of crooks out of New York City, who managed to cash bogus checks at the properties in exchange for gambling chips. In total, the quintet of crooks managed to […]