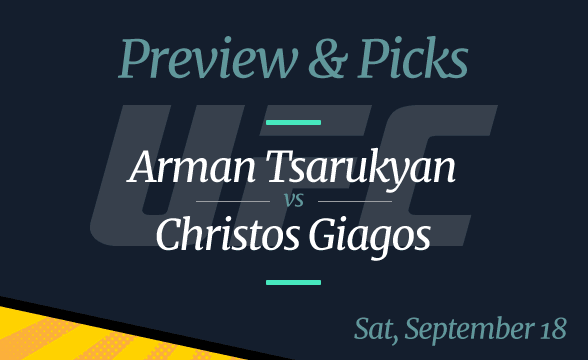 Saturday is not going to be like any other UFC Vegas event as both the main card and preliminary card are full of fights you would want to see. The bout between Arman Tsarukyan and Christos Giagos is one of those. Both fighters are on the main card and the odds back Tsarukyan overwhelmingly giving him a (-850) shot at winning the upcoming clash.

Then you have Giagos whose professional career has taken him through various ups and downs. Giagos is a heavy, heavy underdog posted at (+600) and his chances of a win look fairly slim. Giagos has only one lost fight in his five appearances in the UFC, and this is worth mentioning.

Where and When Is Vegas 37 Tsarukyan vs Giagos?

As part of the Vegas 37 Smith vs Spann event, the fight between Tsarukyan and Giagos is taking place on Saturday, September 18 at the UFC Apex in Las Vegas, Nevada.

Tale of the Tape Tsarukyan vs Giagos

Giagos on a Winning Streak to Face off Unchallenged Tsarukyan

Giagos’ overall showing in the UFC has been patchy. He fought in nine Ultimate Fighting Championship events and won in five. His overall career stats is 19-8-0, and it’s safe to say that he has mileage behind his back. Fans definitely know Giagos who now has a chance to carry on with yet another victory in the promotion.

He has won both of his most recent fights against Carlton Minus and Sean Soriano. He submitted Soriano in less than a minute which revealed him as a determined and unapologetic fighter.

On the other hand, we have Arman Tsarukyan. The fighter has made a great impression in the UFC so far with a single loss in his debut fight against Islam Makhachev. Since then, he has been flying on a three-win streak which will now come to a test. In all three fights, Tsarukyan went the distance and fought five minutes.

This doesn’t mean that he is incapable of knocking down or submitting an opponent sooner – it just means that he would much rather bid his time than risk making a mistake. It’s a fighting style that is supposed to pay off dividends against Giagos. Whether this is the case would become clearer on Saturday.

We still see tremendous value in Giagos, though, as the fighter’s (+600) fight promises a tidy reward. The totals are (+150) for the fight going over two rounds, but the bookies seem to give much better odds to the fight concluding within the first two rounds.

Ideally, we would pick Totals Over 2 ½ rounds (+150) and Tsarukyan to win, although if pressed, we might put a small wager on Giagos as well.

Pennsylvania casinos are in for a celebration as September 2021 has proved to be far better than September 2020 as the total generated revenue by all of the gambling facilities, as reported by the state’s regulators for this month, is $415.6 million. That is a 46% increase than September 2020, which equals $130 million higher […]

Put simply, 2020 sucked for the gaming industry. With COVID-19 forcing lengthy shutdowns of commercial activity everywhere, casinos took a major hit that is still being felt today. The good news, though, is that things are returning to a quasi-normal state in most areas, and Las Vegas, the US gambling capital, is on the road […]

NBA Chooses TAB as Its Official Wagering Partner in Australia

The parent company behind online sports betting brand Betway and multi-brand online casino Spin, Super Group, continued to expand into markets in the US, launching in its fifth jurisdiction. Super Group also received a new operating license in Europe. Launch in Iowa, License in Poland Continuing to execute on its strategy to bring its leading […]