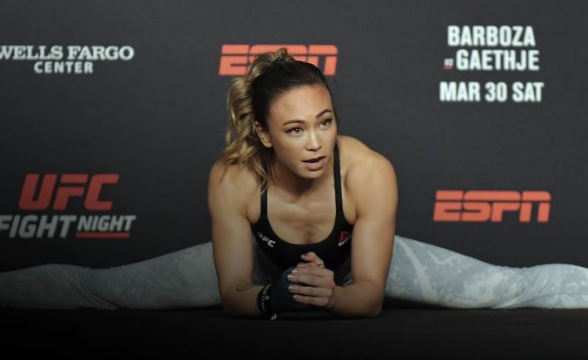 Michelle Waterson squares off with Amanda Lemos at UFC on ABC 3 in a women’s strawweight fight. Both fighters have been fighting in the UFC for years with decent success. Waterson is 18-9 overall, with a 6-5 record since coming to the UFC. Meanwhile, Lemos is 11-2 in her career with a 5-2 record in the UFC.

Oddsmakers think Lemos is going to win on Saturday. They think of her as a strong favorite in Saturday’s bout, but Waterson mustn’t be underestimated. After all, she’s fought some real UFC legends in her career, mostly in the strawweight division.

All odds are per FanDuel as of July 12.

The previous time Michelle Waterson went into the octagon was in May 2021 when she fought Marina Rodriguez in a women’s flyweight bout. Waterson lost that fight, which prompted her to return to her natural weight class – strawweight.

Her most recent strawweight fight saw her beat Angela Hill in September 2020, when she put an end to her two-fight losing streak. The fighters she lost to were Carla Esparza and Joanna Jedrzejczyk, both of whom later went on to become champions.

Amanda Lemos Looking to Get Back to Her Winning Ways

Waterson has a breathtaking UFC portfolio, but so does her next opponent. Amanda Lemos has lost just two fights since the start of her professional career, one of which happened last April. Jessica Andrade beat her by submission, thus putting an end to Lemos’ five-fight winning streak.

Speaking of her victorious run, it started with Lemos’ strawweight debut in the UFC when she beat Miranda Granger by technical submission. Before that, she was fighting in the women’s bantamweight division.

Amanda Lemos is just bigger, better, and stronger than Michelle Waterson. That said, we’re almost 100% certain she will win on Saturday. However, we also believe Waterson’s experience could play a big role in this fight, possibly allowing her to stay on her feet until the final bell.