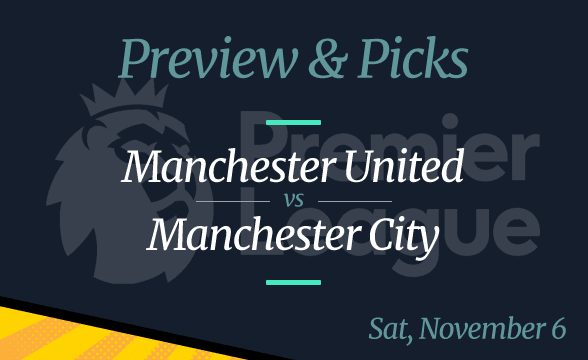 Two city rivals meet on Saturday at Old Trafford, where the hosts have been dominant since the early days of the rivalry. Still, in recent years – since the UAE takeover in 2008 – it’s Manchester City that’s been more successful.

Oddsmakers think the Sky Blues will further continue their dominance with a win in Round 11. It’s not just that they have the most expensive squad in the Premier League; it’s also because their rivals have trouble finding proper form.

Odds taken from DraftKings on November 2, 2021

Solskjaer Remains in Charge of the Red Devils

The Manchester United manager has been in the hot seat for weeks, following some really poor performances. The worst of those was the defeat to Liverpool at Old Trafford, which saw the Red Devils losing 5-0.

Solskjaer didn’t get sacked after that game but got another chance to prove his worth. And he took it! Last weekend, his team defeated Tottenham 3-0 in London.

Unfortunately for the Norwegian, that probably isn’t going to be enough for everyone to forget the problems Manchester United’s been having with him in charge. For him to retain his job, his boys need to continue winning.

Unfortunately, his boys just don’t seem as good as those playing for the team from the other part of town. Sure, they got Cristiano Ronaldo and many other superstars on the roster, but so does Manchester City.

Man City Looking to Bounce Back After a Round 10 Defeat

The reigning Premier League champion is 6-2-2 on the season, with its second defeat in the 2021-22 campaign happening last weekend. It was a strange one – Manchester City lost 2-0 at home to Crystal Palace despite entering the game as a -833 favorite.

Still, there’s an explanation behind their failure. The Sky Blues played an entire half with ten men on the pitch after their defender, Aymeric Laporte, got sent off. That is the reason why the Spanish center-back will miss the Man United duel as well.

Further, Man City had a goal disallowed, not to mention that we saw their players missing plenty of chances. That’s something they mustn’t do on Saturday if they want to grab themselves a win.

They surely have the manpower to do it, even though it’s always hard to win battles like these. Still, they seem to love playing at Old Trafford, which is where they won five of the previous ten duels with their city rival.

Pick: Manchester City to win; we should see over 2.5 goals in the game.

Low6 Signs Third US Sports Partnership with the NBA's Pistons