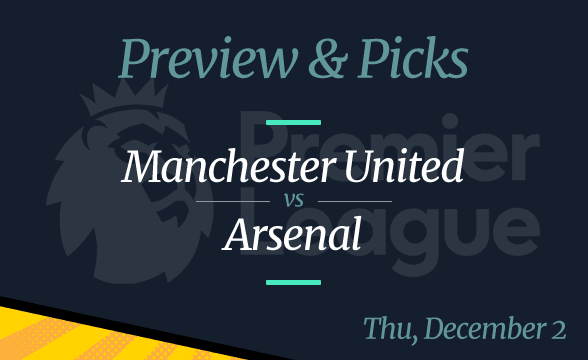 All odds are per FanDuel as of November 29.

Manchester United has a new boss. Ralf Rangnick has been appointed their interim manager until the end of the season. However, until he arrives, Michael Carrick will continue to lead the team in the role of the caretaker manager. The Manchester United vs Arsenal game will be his third in this position. The previous two saw Carrick’s boys beat Villarreal 2-0 in the Champions League and play 1-1 with Chelsea in the Premier League.

In both of those games, we saw the Red Devils playing on the back foot. They let their opponents have the ball and looked for their chances from counter-attacks. It worked both times, but the game with Chelsea was a prime example of this sort of tactic.

In the draw with Chelsea, we saw Jadon Sancho scoring his first-ever goal for Man United. He did it from a counter-attack after stealing the ball from Chelsea’s midfielder Jorginho in the center of the pitch. The Blues did fight back but failed to score more than one goal. Still, they did have plenty of opportunities. In fact, Chelsea’s players had 24 goal attempts. The ones playing for Man United had only three.

The Gunners have been playing excellent soccer over the last couple of weeks. In fact, they’ve suffered only one defeat in the Premier League since August, winning most of their games along the way. The defeat in question happened two rounds ago when they lost to Liverpool 4-0 at Anfield. The Gunners bounced back straight away, beating Newcastle 2-0 in the following game.

As a result, Arsenal is now flying pretty high. The Gunners are currently sitting in fifth place in the Premier League table. Still, the question is, how long will they stay there? The thing is that their schedule is going to get ugly in the near future, starting with the game with Man United.

The reason why this needs to worry them is that they don’t seem to do well when playing against teams packed with superstars. In addition to losing to Liverpool earlier this month, we also saw them lose to a couple of heavyweights back in August – Chelsea, Manchester City, etc.

Does the same fate await them at Old Trafford? Probably, as the player quality is definitely on the side of the hosts. Plus, the Red Devils are probably very motivated because they haven’t won a Premier League game on their turf since September 11.

Betegy to Boost Tipico Retail Offer in Germany and Austria