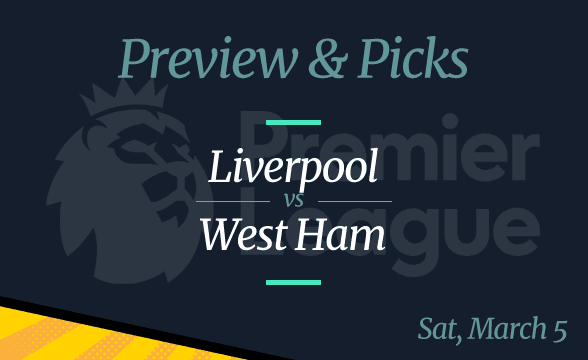 Ahead of Round 28 of the English Premier League, Liverpool is sitting in second place, with six points fewer than Manchester City. However, the Reds have played one game fewer, meaning that the chance of them winning the title is still pretty good. To do that, they just need to keep on winning.

They are on a 6-win streak in the Prem ahead of their clash with West Ham on Saturday at Anfield. Can they make it seven? Let’s see!

Motivated Liverpool Looking for Another Win

Jurgen Klopp’s boys have been nothing short of brilliant in 2022. They are without a single loss this year, with 10 straight wins in all competitions. Truth be told, one of those happened after penalties. The game in question is the EFL Cup Final against Chelsea, which the Reds won after a lengthy penalty shootout, which saw all of their 11 players score, including their goalie.

The reason behind Liverpool’s recent surge is that all of their players are playing great. Instead of relying on a couple of superstars, team chemistry is what’s making Liverpool so powerful. Still, there are a couple of players who do stand out, most notably Mohamed Salah, who’s the current scoring leader in the Premier League.

Behind him is another Liverpool player – Diogo Jota – who has 12 EPL goals to his name so far. And behind him, in the #3 place in the top-scorers list is Sadio Mane with 11.

In the 2021-22 season of the Premier League, Liverpool has only two defeats. One of those happened in the first part of the season when they lost to West Ham on the road. The score was 3-2 for the Hammers, which sure is a great achievement. However, there’s a caveat.

Liverpool was the better side in that match. The Reds had way more goal attempts, while also keeping the ball in their possession for over two-thirds of the time. So, why did they lose? Their goalkeeper Alisson conceded an own goal, while their forwards missed a lot of chances.

Will it be different this time? Well, West Ham will probably use the same tactic as before. They’re going to let Liverpool attack and look for their chances from counterattacks. It worked for them several times in the last couple of weeks. For example, in their most recent game, they defeated Wolves even though they had the ball in their possession for just 39% of the time.

However, Liverpool is not Wolves; Liverpool players are much, much better. That said, anything but a win for the Reds would be a huge surprise.

Picks: Liverpool to Win; Over 2.5 Goals