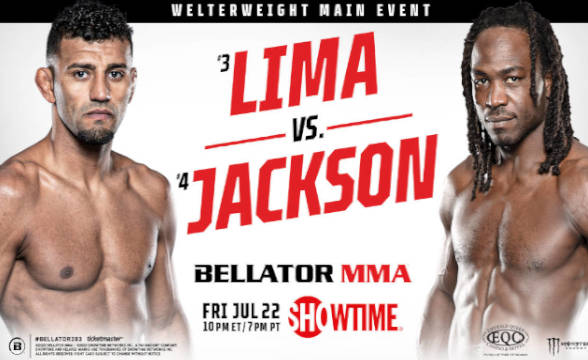 It’s been a month since Bellator MMA last hosted an event, but it seems it was worth the wait. Judging by the main card of Bellator 283, MMA fans and bettors are going to have an interesting start to the weekend. The event in question is taking place at Emerald Queen Casino and Hotel in Tacoma, Washington on Friday, July 22.

Even though Bellator 283 is packed with interesting bouts, we’re going to focus on the headliner bout in this betting preview. The fight we’re talking about is a welterweight duel between the former three-time champ, Douglas Lima and Jason Jackson, whose fighting nickname – The Ass-Kicking Machine – says a lot about the 31-year-old Jamaican.

All odds are per BetOnline as of July 18.

The Brazilian fighter is 34 years old, meaning that he still has a few more years in him before retirement. The big question is whether he has it in him to continue fighting in such a strong MMA promotion as Bellator?

Even though he’s a Bellator MMA legend who’s held the championship belt on three separate occasions, Lima’s recent run is worrying. He is 0-3 since 2019, and if he doesn’t return to the winning track, we could see him end up without a contract in this promotion.

The good news for Lima’s fans is that he still probably has the skillset that won him the titles in the past. The evidence of this is that the three losses he suffered in his previous three bouts, all happened by decision.

Further, Lima also experimented with moving up/down a weight division, which proved not to be a great idea. In fact, his losing streak started with a loss in his middleweight debut in which he was fighting for the Bellator Middleweight Championship against Gegard Mousasi. Lima lost that fight by unanimous decision.

He then moved back to welterweight but lost again. This time, Yaroslav Amosov beat him; once again, it happened by unanimous decision. Then, in Lima’s most recent Bellator MMA fight, he lost to Michael Page by split decision.

Even though he’s fighting against an out-of-form fighter, we don’t think Jackson should be the favorite. At least not the odds-on favorite. Why? Because he’s never fought against such a good fighter as Douglas Lima.

Jackson did fight against some decent Bellator fighters, but he didn’t impress each time. His overall record is 15-4, while in Bellator MMA, Jackson is 5-1. However, all of his Bellator fights happened by points.

Online sportsbooks favor Jackson, but we think they’re wrong. We have faith in the former champ – not only does Lima have the skills to win on Friday but he’s also super-motivated to do so.