Blue Guru Games, a game studio part of LeoVegas Group, announced the launch of its first slot title, The Nemean Lion, in preparation for further launches in the second half of the year.

The First of Many

The Nemean Lion, the first in Blue Guru Games’ future portfolio of slot games, is now available through several iGaming operators. The studio, which already signed content distribution deals with leading aggregators, including Relax Gaming and Oryx Gaming, is planning to enter the lucrative online casino market in the US.

Commenting on the milestone achievement of the game studio, Blue Guru Games’ chief executive officer Andrew Braithwaite was delighted to see the launch of the first game developed by the studio.

“This is an important milestone of course and there’s so much more to come. We’re particularly excited about the US which provides such an exciting opportunity. We’re a great team having lots of fun making games, and we can’t wait to get our ideas out and see them played!”

Blue Guru Games was unveiled as LeoVegas’ new game studio in May 2021 as part of the group’s wider strategy aimed at improving the efficiency of cost control throughout its value chain. The developer studio was launched via LeoVentures, the group’s investment arm, following a capital injection from the parent and since then has grown its team to 30 people.

“It is fantastic to see how quickly they have moved from concept to inception and a real testament to the strong commitment and entrepreneurship we have within the Group and our portfolio companies.”

With eyes “firmly on the US market” and its growing demand for “high-quality games” seen as perfectly complementing LeoVegas’ aims and capabilities, “I look forward to our continued development and growth,” concluded Hagman.

Last year, LeoVegas revealed its plans to enter the regulated market in the US in the first half of 2022 by launching online casino operations in partnership with Caesars Entertainment.

LeoVegas Group’s investment arm, Leo Ventures, seeks to add strategic value to the group’s products and services via investments in entrepreneurial companies from the gambling industry, such as CasinoGrounds, Pixel.bet and BeyondPlay.

Last month, the group launched a new tech hub based in Warsaw, Poland, to support the group’s development efforts across Europe by a team of 60 new developers and help the company speed up the building of its next-generation platform across all its assets. 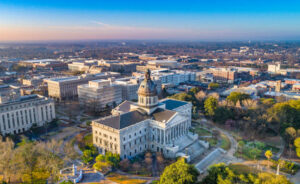