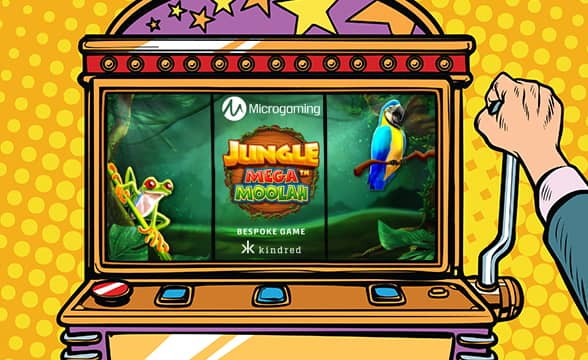 The leading casino software developer, Microgaming, announced that the new Jungle Mega Moolah slot game launched exclusively for Kindred Group. Although the slot game is unique for Kindred, it is a part of Microgaming’s leading jackpot network.

In fact, Mega Moolah is one of Microgaming’s most famous online casino games and a part of the company’s leading jackpot slots. Since its launch in November 2006, to date, the jackpot network is known to have paid record jackpots with more than €1.3 billion in total winnings.

Jungle Mega Moolah is a five-reel, 25 pay line slot game that holds on to the stylish jungle theme. Furthermore, according to the statement revealed by Microgaming, “the wildlife is fiercer and wilder than ever before” in the new game.

Users who play the new game will enjoy the Chimpanzees who act as scatters. Furthermore, three or more Chimpanzees will trigger 15 free spins at a 3x multiplier. With that in mind, Jungle Mega Moolah’s biggest prize remains the jackpot. Players have the chance to win one of four progressive jackpots via four unique and randomly triggered bonus rounds.

In a statement, Andrew Booth, Director of Games at Microgaming revealed that while Jungle Mega Moolah is completely unique to Kindred Group Casino, it is also linked to the huge progressive network that serves thousands of players.

Furthermore, he added that the company is proud of being one of the biggest suppliers of gaming portfolio with some of the best games. In conclusion, Booth stressed that Microgaming takes pride in being able to offer unique experiences for its partners and their players.

“Progressive jackpots don’t come any bigger than Mega Moolah, and it’s exciting to be able to offer our players our very own unique version of a classic game.”

The Group Head of Casino at Kindred Group, David Robertson, said that it is exciting for the company to be able to offer its unique version of the classic game. He outlined that this proves that Microgaming can provide exclusively tailor-made games for its partners.