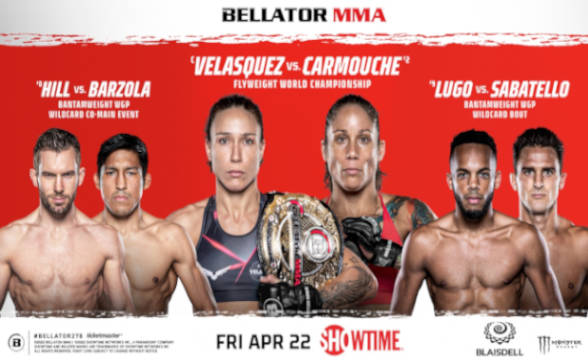 Bellator MMA goes to Hawaii this weekend. Neal S. Blaisdell Arena is the place where Bellator 278 event will take place this Saturday. There are nine fights on the program for the upcoming event, with Juliana Velasquez vs Liz Carmouche being the headliner bout.

The two go toe to toe in a battle for the Bellator MMA Women’s Flyweight World Championship. Undefeated Juliana Velasquez (12-0) is the reigning champ, having held the title since December 2020. The challenger is Liz Carmouche (16-7), a former UFC title challenger who’s 3-0 since coming to Bellator MMA.

Juliana Velasquez Defend the Title for the Second Time

December 10, 2020, was when Velasquez won the championship belt after beating Ilima-Lei Macfarlane by unanimous decision. Seven months later, she defended her title against Denise Kielholtz, winning by slit decision.

It was the 12th win of her professional career which started back in 2014. Her career kicked off in her native Brazil. Then, in 2017, she signed for Bellator MMA, which is where she’s been ever since. In this promotion, she’s achieved legendary status. Velasquez is one of the few fighters who are still without a single loss. Is that going to change this weekend?

Unlike Velasquez, Carmouche has plenty of UFC experience. She fought ten fights from 2013 to 2019, the last of which was a title fight. The bout in question was against Valentina Shevchenko for the UFC Women’s Flyweight Championship.

After losing the UFC title bout, Carmouche moved to Bellator MMA. She made her debut in September 2020, beating DeAnna Bennett by submission. Then in April 2021, she defeated Vanessa Porto by unanimous decision.

Her most recent fight happened in June 2021, when we saw Carmouche beat Kana Watanabe by technical knockout.

Oddsmakers see Velasquez as the favorite to win the main event of Bellator 278. However, Carmouche’s UFC portfolio means that she needs to be taken seriously. This fighter has won against such MMA legends as Jennifer Maia and Jessica Andrade, so why wouldn’t she be able to beat Velasquez as well?