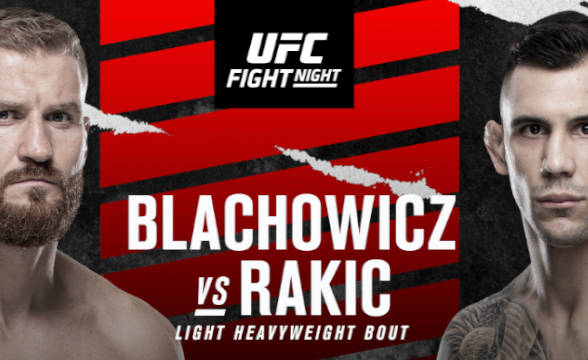 UFC on ESPN 36 a.k.a. UFC on ESPN: Błachowicz vs. Rakić is on the program on Saturday, May 14, 2022, at the UFC Apex facility near Vegas. Even though there are no title bouts on the program, there’s still plenty of excitement awaiting MMA fans and bettors. The most exciting fight of the day is the headliner bout – Jan Błachowicz vs Aleksandar Rakić.

Błachowicz, who is a former UFC Light Heavyweight champion, is trying to bounce back from the title loss in October 2021. This is going to be his first fight since Glover Teixeira beat him by submission, thus taking away the championship belt from the Polish fighter.

Unfortunately for Błachowicz, winning on Saturday is not going to be easy as he’s locking horns with a fantastic opponent. In fact, oddsmakers think it’s Aleksandar Rakić who’s more likely to win the main event of UFC on ESPN 36.

All odds are per FanDuel as of May 9.

Rakić is 14-2 in his professional career, with nine wins by KO/TKO. However, only two of those KO/TKO wins happened since he’s been in the UFC. In fact, the last time he defeated someone by this method was in June 2019.

This, however, doesn’t imply that he’s been unimpressive in the UFC. On the contrary, Rakić has won some pretty big fights so far. For instance, in 2020, we saw him beat Anthony Smith by decision. The same happened a year later against Thiago Santos.

Thanks to his impressive run, Rakić is now seen as the favorite in Saturday’s bout. However, there’s another reason for that – his rival might not be 100% fit after suffering an injury a few months ago.

In fact, Błachowicz’s injury in March was the reason why the fight with Rakić ended up being postponed to May 14.

A Difficult Task for Jan Błachowicz

Just some seven months ago, Jan Błachowicz was the ruler of the UFC Light Heavyweight division. He won the vacant championship belt in September 2020 after defeating Dominick Reyes by technical knockout, earning himself a Performance of the Night bonus.

In March 2021, he defended his title against Israel Adesanya, who entered the fight as a strong -278 favorite. Nevertheless, Błachowicz was able to outsmart his opponent, eventually getting the judges’ vote.

Unfortunately for him, he wasn’t able to do the same against Glover Teixeira in October 2021. Despite coming into the octagon as a -303 favorite, Błachowicz ended up losing. His opponent won by submission in round 2.

The good news for Błachowicz is that the same probably isn’t going to happen this Saturday. His next rival just isn’t too great when it comes to grappling. Instead, this time, Błachowicz needs to worry about getting knocked out.

Błachowicz has the experience on his side, but Rakić is a rising star of the UFC with big plans for the future. If Rakić is going to become a superstar, he needs to win big fights like this one. And he needs to do it in style. By this, we mean that Rakić needs to end the fight early, with a knockout.

Consortium Led by Boehly Will Acquire Chelsea FC for $5.2B