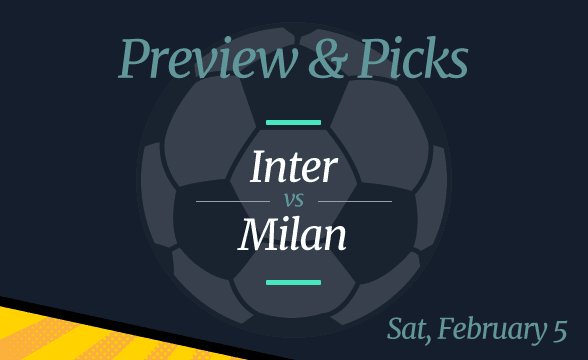 Inter vs AC Milan a.k.a. Derby della Madonnina is one of the fiercest fixtures in Italian soccer. The 301st clash between the two rivals from Milan is on the program this Saturday.

Inter, the leader of the Italian Serie A has four points more than its city rival, as well as one game fewer. What this means is that win a win this weekend, Inter would get one step closer to retaining the title.

All odds are per FanDuel as of January 31.

The Start of a Tough Schedule for Inter

Inter is doing very well at the moment, with 53 points in Serie A. This team is sitting at the very top of the table, with four points more than Napoli and AC Milan, two teams that are just behind. The good news for Inter is that they’ve played one game fewer than the two, meaning that they could increase the point gap even further.

The trouble for Inter is that their schedule in February looks really ugly. After Derby della Madonnina in Serie A, they play with AS Roma in the Italian Cup. Then, they travel to Stadio Diego Armando Maradona to play against Napoli in the league. Further, just four days after that match, Inter takes on Liverpool in the Champions League.

Knowing all this, Inter’s coach Simone Inzaghi will probably be very cautious, trying to keep all of his key men fit and injury-free. That said, they probably aren’t going to play in top gear in the clash with AC Milan.

AC Milan Want to Get Back on the Winning Track

After winning four straight games, their winning streak ended on January 17. That’s when they lost 2-1 at home to Spezia, a team from near the bottom of the Serie A table. Six days later, they played a draw with Juventus.

The game was played in Milan and the hosts probably feel as if they could’ve done better. It was 0-0 after 90 minutes, even though AC Milan had plenty of goal opportunities. The worst thing about that game is that their top scorer Zlatan Ibrahimovic picked up an injury.

Ibrahimovic will miss Saturday’s game, together with at least three other players – Frank Kessie, Fikayo Tomori, and Simon Kjaer.

With so many problems, it’s obvious why AC Milan is the underdog in the next game. They’re likely to lose, but we probably aren’t going to see a blowout win for Inter.