The Finnish Ministry of the Interior has announced new online gambling loss limits on Tuesday, with the measures lasting through September 30.

Finland has become the latest country to introduce monthly loss gambling limits in response to the COVID-19 outbreak and lockdown. With strict monthly loss limits in force, and lottery draws suspended in their entirety, the country’s gamblers will have fewer opportunities to spend time online, although some fear the measure could lead to an increase in illegal and grey area gambling.

Finland’s Ministry of the Interior released a statement on Tuesday, saying that so-called “fast-paced gambling games,” would be subject to a €500 loss limit moving forward, reducing the amount from €2,000 previously. The measure was coordinated with the government-owned betting agency Veikkaus Oy.

The proposed changes will come into force on Friday, May 1 and last through September 30. They will cover all main verticals supported in the country, including bingo, virtual betting, and casino games, but not poker. Lottery draws, however, will be fully halted as of May 4, and most likely won’t be restored until September.

As part of complying with the measures, consumers will have to set a daily loss limit which cannot exceed the new total. Nordic markets have proven particularly challenging with a spate of proposed restrictive measures biting in the revenue of gambling companies.

Sweden is another Nordic country to introduce restrictive measures on online gambling, prompting companies to face new regulatory and marketing realities, and cope with falling revenue. Lithuania and Latvia have also imposed bans on online gambling or advertisement take a hit in the operating results of businesses in the sector there.

Veikkaus released a statement last week, cautioning, that weekly revenue was already falling below $21.20 million, well below the $32.60 million the company expected based on pre-outbreak forecasts.

In 2019, the Economist wrote an article about Finland’s growing gambling addiction problem, citing a survey from 2016 that 86% of the entire population had gambled at least once over the course of a year.

Veikkaus did say that there had been no signs, however, of land-based consumers migrating to online platforms, depleting the company from further revenue sources. Betting revenue has naturally fallen due to the suspension of sports globally.

Some have cautioned that if local gamers aren’t turning to online licensed options at home, they might end up registering in droves at international operators or operators licensed by grey regulatory authorities such as Curacao.

Ohisalo agreed there could be a surge in traffic towards international operators, but she also assured that the National Police Board’s Lottery Administration is working on the issue. Saaramia Varvio, head of the Lottery Administration, said that the police will monitor social media for unauthorized and illegal gambling advertisement.

Last week, Veikkaus also began negotiations with the governments to enact possible layoffs in the land-based sector should operations not be restored to normal soon. In light of the latest measures and falling land-based revenue, this seems a more likely option now.

Air Dice Group, a leading developer of highly entertaining money games, has reinforced its leadership with a new addition. The experienced Erkki Nikunen will join the company as a partner and chief business development officer and will leverage his experience to help the Finnish company grow. Air Dice Reinforces Its Leadership Nikunen is an iGaming […]

Finland’s Gambling Monopoly to Be Dissolved per Veikkaus Deputy CEO

Veikkaus, the gambling monopoly in Finland, has started questioning whether the monopoly system in the country is working. The deputy CEO of Veikkaus, Velipekka Nummikoski¸ talked to a Finnish media outlet and confirmed that eliminating the monopoly may be the smartest decision.  Finnish Players Are Turning To Unregulated Markets The possibility of ending the monopoly […] 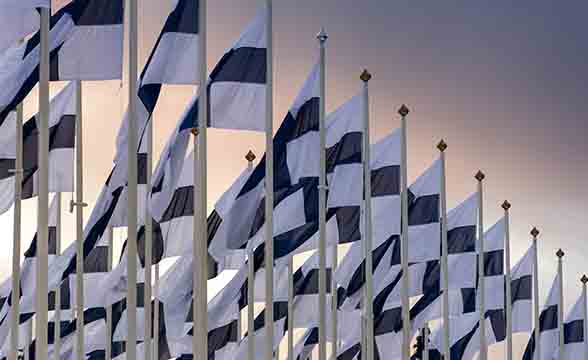 Veikkaus, a state-owned Finnish gambling company, announced new restrictions concerning slot games. Starting September 1, gamblers will have to abide by new playtime restrictions when playing in shops and grocery stores. Veikkaus Unveils New Rules The Veikkaus ruled that shops will have to turn off all slot machines after 9 pm and not boot them […]

The Finnish state-owned gaming operator, Veikkaus, announced Tuesday that it inked two cooperation agreements that will increase the financing for football clubs. Finnish Gaming Monopoly Inks Two Strategic Football Deals The Finnish gaming monopoly revealed that it joined forces with the Finnish Football Association as well as the Veikkausliiga. As a result, each of the […]

Veikkaus unveiled the results of its new survey, outlining that problem gambling in Finland has significantly decreased in 2021 when compared to 2020. Finnish Population Affected by Problem Gambling Decreases in 2021 The Finnish state-owned gaming operator, Veikkaus, released the results of a new survey on Wednesday. This was Veikkaus’ 11th population-level survey and it […]

Yesterday, Veikkaus, the Finnish state-owned gaming operator, opened its second casino in the country. This comes as Veikkaus faces questions about its future as Finland’s gambling monopoly. It follows only months after the operator opened its first casino, Casino Helsinki. Casino Tampere Comes to Finland Casino Tampere is a new casino that offers both classic […]

Deal with Carrus to See FDJ Power Veikkaus With a DDP

Through a partnership with the betting solutions and services provider Carrus Gaming, the French next generation sports betting platform, FDJ Gaming Solutions, will provide its digital development platform and image analysis to the Finnish betting agency Veikkaus Oy. This Will Be The First Time FDJ Has Provided a DDP The deal will assist Veikkaus Oy […]

Veikkaus, the Finish gambling operator revealed that the number of problem gamblers has decreased significantly. While the number of physical slot machines was reduced, fewer gamblers showed interest in slots. On the other hand, more online gamblers have set gambling loss limits, thus reducing their losses. Problem Gambling Rate Plummets In an effort to reduce […]

Finland was one of the Nordic iGaming markets to enforce tough restrictions on gaming venues as the COVID-19 pandemic was mounting its charge across the country. Yet, the fourth quarter of 2021 seems to be accompanied by the easing up of anti-COVID restrictions. As a result, the country’s gambling behemoth, Veikkaus, announced that it has […]

Veikkaus Reduces Workforce, Parts Ways with up to 190 Workers

Citing decreased business volumes, Finnish state-run gambling operator Veikkaus announced that it will reduce its workforce. The company said today that it will be letting go of as many as 190 employees. Veikkaus to Lay Off Employees, Change Employment for Some Workers It was back in November of last year when Veikkaus, the gambling monopoly […]