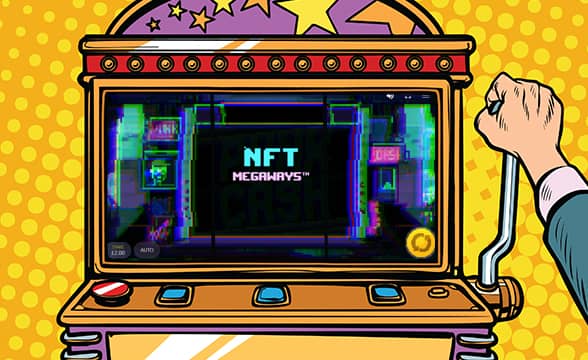 A Tribute to NFT and Digital Artworks

The assets, known simply as CryptoPunks 914, 3008, 4701, and 8143, can now be found in the user interface of the game. As standalone artwork, though, these NFTs are unique pieces of digital code ingrained in the Ethereum blockchain and under the exclusive ownership of the gaming behemoth.

The decision to add them into a game combines two unique development choices. First, the use of NFT-inspired art, and second, the Megaways mechanic, which has made a big splash in the iGaming world and recently saw many popular classics overhauled to feature it, and not least Gonzo’s Quest.

Commenting on the slot, Evolution chief product officer Todd Haushalter touted the company’s ability to innovate and stay ahead of the pack. Since Evolution acquired NetEnt, and Red Tiger as part of the former, the company has been able to deliver on the slot as well as live casino front.

Evolution Always at the Helm of Innovation

“At Evolution, we have a long record of innovation and being first with distinctively different new ideas. With all of our group brands, our goal is always to offer players the most feature-rich and vivid gameplay possible,” Haushalter noted. He continued by explaining that the chief focus of the slot is to be original and creative and that is precisely why the CryptoPunk NFTs turned out to be a great pick for the company.

The game doesn’t use any blockchain features by the look of it, but it promotes awareness for NFTs, which are a booming market. Haushalter is confident that the game would appeal to slot lovers anywhere in the world while setting a new development trend.

“The team has done a brilliant job on this launch, and we’re looking forward to the game being live,” the chief executive explained. The game itself expects no previous knowledge or understanding of the NFT sector to play. NFT Megaways welcome screen simply states “Get Punks, Get Rich” and offers an arcade-style gameplay and user interface. The arcade touch and feigned 2D look are brilliant and satisfying and will appeal to people who may not have had truck with arcades in their life.

For all intents and purposes, the game feels like a regular slot with a slightly better RTP than most Megaways titles, set at 96%. The catchphrase “Get Punks, Get Rich” also refers to the NFTs that appear on a dedicated bar above the main reels and make sure to help you win in combination with low-paying symbols.

The user interface is itself imbued with various references to the crypto sector, including Ethereum, Bitcoin, Dogecoin, and Litecoin’s symbols, a tribute to Tesla’s armored vehicle, Cybertruck, and Twitter, which recently announced that it would become more involved with crypto space and allow people to “tip” in cryptocurrencies.

Novibet and Gaming Innovation Group announced their extended partnership, which will see Novibet continue using GiG’s Comply tool to automatically ensure compliance with its affiliate marketing programs. Novibet Will Continue Using GiG’s Comply The Gaming Innovation Group (GiG) announced on its website the extension of its partnership with Novibet – the European gaming operator – […]

Pariplay, a NeoGames subsidiary, has expanded its aggregation capabilities through the addition of a new partner, Caleta Gaming. As a result, the iGaming studio and its products will be incorporated into the roster of Pariplay’s Ignite platform and program. Pariplay Adds New Upcoming Supplier to Ignite Pariplay has earned a name for itself through the […]

AstroPay has announced a new Global Affiliates Program which will help the company drive further revenue and generate more growth opportunities for its own product but also the partner businesses it’s teaming up with. This reflects AstroPay’s grander ambitions to strike home with new global audiences and establish itself as an affiliate partner with a […]