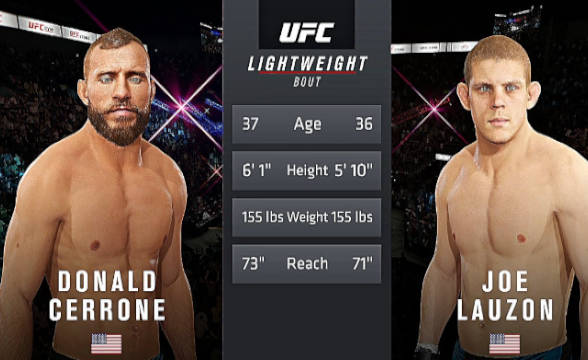 UFC on ESPN 37 is on the program this Saturday at Moody Center in Austin, Texas. Also known as UFC on ESPN: Kattar vs Emmett for its headliner fight, the event will feature another five main card bouts. One of the most interesting of those is the lightweight clash between Donald ‘Cowboy’ Cerrone and Joe Lauzon.

The list of reasons why Cerrone vs Lauzon is supposed to be a real barnburner is very long, starting with the fact that this could be one of Cowboy’s last professional fights. Another reason is that Lauzon is making a comeback to the UFC after nearly four years of absence.

Finally, the betting odds of these two fighters aren’t miles apart, meaning that bookmakers too predict a true thriller on June 18.

All odds are per FanDuel as of June 15.

Now a 39-year-old, Cerrone is reportedly thinking about retirement. In fact, in a recent interview, he suggested he’s going to fight only two more bouts before ending his professional career. What this means is that the fight with Lauzon could be the penultimate time he’s coming inside the octagon.

It’s no secret that Cerrone would love to end his professional career with a win or two, which is why you should expect him to give his utmost on Saturday. His overall record is far from bad (36-16), but the thing is that he’s without a win in his previous six UFC bouts.

Since May 2019, we saw Cowboy lose five fights, with one of his bouts being declared no contest. It sure sounds bad, but there’s an explanation behind his poor run – he’s fought some elite fighters during that period.

The fighters he’s lost to over the past three years are, namely:

Knowing this, it’s clear that Cerrone mustn’t be underestimated. He sure still has it in him to win at least one more fight in the UFC.

Joe Lauzon Coming Back to the Octagon

With a 28-15 record, Lauzon is one of the MMA greats. At the age of 38, he too is probably considering retirement. In fact, many believed he was going to retire a few years ago. The story goes that the last time he fought in the UFC was in October 2019, after which he took three and a half years’ long hiatus.

Thirty-three months have passed since he fought the last time, which is probably the main reason why the odds are leaning in his opponent’s favor. Still, Lauzon mustn’t be underestimated, especially knowing that he loves fighting against fighters like Cerrone.

It’s very likely the fight will end by submission. The big question is who will submit who – will Cerrone submit Lauzon, or will it be the other way around?

Considering that Cerrone’s been fighting way more than his opponent in recent times, our vote goes to him. After all, during Lauzon’s hiatus, Cerrone has fought four bouts.