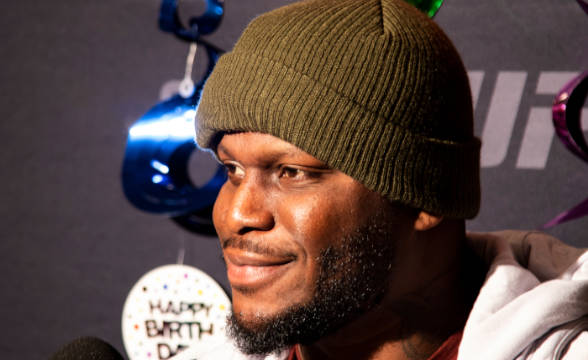 Derrick Lewis vs Sergey Spivak is the headliner fight of UFC Fight Night 215, an event also known as UFC on ESPN+ 73 or UFC Vegas 65. This is a heavyweight clash between two big and heavy fighters who know how to throw incredibly powerful strikes.

Lewis is a 265-pound beast who can put practically anyone to sleep with his incredible strike(s). It really takes one punch for him to knock out a rival, which explains why 80.76% of his wins happened by KO/TKO.

Sergey Spivak might not have as powerful a punch, but he does tend to throw a huge volume of strikes at his opponents. He’s also a great wrestler/grappler, which makes him a whole-rounded fighter with plenty of weapons in his arsenal.

Knowing all this, one can only assume that Lewis vs Spivak is going to be one hell of a fight. But who’s gonna be the one with his arm held high at the end of the bout? To see what we think, read our fight preview until the very end!

Derrick Lewis is a Beast You Should Be Afraid Of

Nicknamed The Black Beast, Lewis is a 6’3, 265-pound wrecking ball that can run over literally anyone. In his portfolio, he’s got 26 wins, 21 of which happened by KO/TKO. He’s famous for his incredible punches, which have put to sleep a number of elite fighters.

Some of his most memorable wins include the one over Curtis Blaydes and the one against Alexander Volkov. He won both of those by knockout, winning himself the Performance of the Night bonus each time. Then, there’s that KO win over Chris Daukaus a year ago, when Lewis broke the record for most KO/TKO wins in the UFC.

Lewis has also had a fair share of losses. In fact, he’s got 10 defeats on his record, most of which happened by KO/TKO. This doesn’t mean he’s got a weak chin – it means that he’s lost to some real knockout experts. Among those are Tai Tuivasa, Cyril Gane, and Sergei Pavlovich.

Sergey Spivak Looks Like Someone Who Could Beat Lewis

It’s clear that the key to beating Lewis is to prevent him from hitting you hard. He’s gonna go for a knockout strike against Spivak, and it’s up to the Moldovan fighter to stop him. Can he do it? We think he can.

Spivak has already fought against similar fighters to Lewis. In some fights, he did well. For instance, in 2019, he defeated Tai Tuivasa by submission, while also winning against Augusto Sakai and Greg Hardy by TKO.

Spivak’s most recent loss happened to Tom Aspinall. The Englishman beat him by TKO in September 2021. Similarly to Lewis, Aspinall too is a powerful striker, but he’s way more agile than the American. That said, we think Spivak should be able to outsmart Lewis who can be sluggish sometimes.

Both fighters are 6’3, but Lewis is 20+ pounds heavier than Spivak. He’s got a more powerful punch, but he’s not as athletic as his opponent. If Spivak can dodge Lewis’ strikes, he’s going to win the UFC Fight Night 215 headliner – it’s as simple as that.

And we think he’s going to pull it off. The 27-year-old is in top shape, with two wins in 2022. We’re sure he’s going to get his third on Saturday.