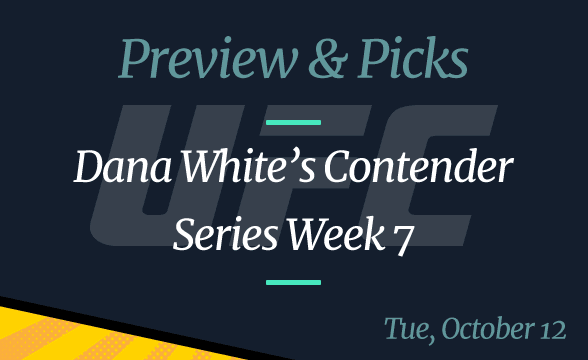 The Dana White’s Contender Series Week 7 is around the cover, and so far as MMA fans go, we are all stoked and looking forward to the series of fights in store for us on Tuesday, October 12. The event will bring together a number of fighters who will battle it out for the chance to advance their career.

The stakes are high as promising fighters will be invited to compete directly in the UFC, and in the meantime, the UFC Apex will play host to the Tuesday event. There are several interesting bouts to keep an eye out for, including Junior Cortez vs. Christian Rodriguez as well as Chris Duncan vs. Slava Borshchev, and not least – Kathryn Paprocki vs. Maria Silva.

Where and When to Watch Dana White Contender Series Week 7

The Contender Series Week 7 will be broadcast on ESPN+ and the fights will be held at UFC Apex starting at 8 pm ET.

Rodriguez versus Cortez: Whom to Back?

The title fight here is the bout between Junior Cortez (+165) and Christian Rodriguez (-200). Rodriguez is going five fights undefeated, his total so far. At the promising age of 23, he may be looking at a UFC career before long.

His opponent, Cortez, has lost once and he is understandably the underdog. Both fighters have the same number of fights, too. Rodriguez is touted as a talent in the making and a prospect who will eventually make it in the UFC.

He is also young allowing him to develop his skills further over the coming years. To do that on a professional level, though, he will have to overcome Cortez who is given good value on the moneyline here. There is always a temptation to bet against the favorite, but in this case, we believe the odds got the bout correctly.

Taking a look at the remainder of the roster, it’s easy to see why there are many tempting opportunities this Tuesday. We expect Martin Buday to bring in a quick fight by most likely KO/TKOing his opponent early and quick. His (-400) are there for a reason as he has a total track record of 8-1-0.

The fight between Jake Hadley and Mitch Raposo is far more interesting as they are both great fighters with 7-0-0 and 5-0-0 respectively. Hadley seems to be the favorite here, but we say pick Raposo as he offers a much better value and he is equally matched to Hadley from where we stand.

For the next pair, Chris Duncan is almost a sure-winner with his powerful punches probably securing him a KO victory on Tuesday. As to Paprocki vs. Silva, we feel Silva is a deserved favorite. You can explore other markets as well in a bid to eke out the best value here.