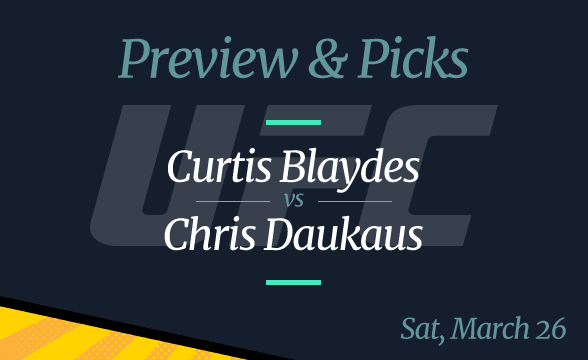 UFC Fight Night: Blaydes vs Daukaus a.k.a. UFC Fight Night 205 is on the program on Saturday, March 26 at Nationwide Arena in Columbus, Ohio. The headliner bout is, by far, the most interesting duel of the evening as it pits two heavyweight legends against one another.

On one end, there’s Curtis Blaydes (15-3-1) whose most recent fight saw him defeat Jairzinho Rozenstruik. On the other, there’s Chris Daukaus (12-4) who is looking to bounce back after getting KO-ed by Derrick Lewis in his most recent bout.

Oddsmakers, however, don’t think Daukaus will pull it off. Instead, they think another loss is on the way. Judging by the odds, the most likely scenario in this bout is a Blaydes win.

All odds are per FanDuel as of March 21.

Is It Time for a Knockout Win for Blaydes?

Ten of Blaydes’ 15 wins happened by knockout/technical knockout. However, he’s without a win by that method in the previous three fights. His most recent bout saw him win against Rozenstruik by unanimous decision.

Before that, he got KO-ed by Lewis in his first fight of 2021. In June 2020, we saw Blaydes beat Alexander Volkov by unanimous decision. The last time he beat someone by KO/TKO was in January 2020 when it happened against Junior dos Santos.

What’s interesting is that Blaydes is still without a single win by submission in his eight-years-long professional MMA career. The reason why this is surprising is that he has a background in wrestling. In fact, he represented the United States in collegiate wrestling during his amateur days.

Can Chris Daukaus Upset the Odds?

If you thought Blaydes was a knockout master, wait to learn about Daukaus! Eleven of this guy’s 12 wins happened by this method.

Another similarity between the two is that same as Blaydes, Chris Daukaus too got KO-ed by Lewis in 2021. The loss to “The Black Beast” was Daukaus’ last trip to the octagon. Before that, however, we saw him win five straight MMA fights, four of which happened in the UFC.

The most impressive fact about his bouts is that for three of those he received a Performance of the Night. Bonus from the UFC. Actually, that was the main reason why he got a chance to fight such a highly rated opponent as Lewis.

He didn’t take his opportunity then, but Daukaus will have another shot at UFC glory this weekend. If he manages to beat favored Blaydes, more good things are bound to follow.

One of these guys is going to get knocked out on Saturday, but who is it going to be? Online sportsbooks favor Blaydes, but in heavyweight clashes, it only takes one lucky punch for the underdog to win. That could easily happen at UFC Fight Night 205.