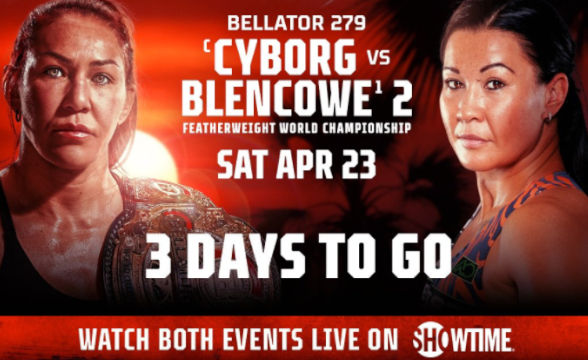 Bellator 279 is on the program on Saturday, April 23, 2022, with the title bout between Cris Cyborg and Arlene Blencowe headlining the event. The two go toe to toe in a battle for the Bellator Women’s Featherweight World Championship.

Cyborg is defending the title for the fourth time and oddsmakers think she’s going to be successful once again. With the odds of -950, the champ is expected to have a field day on Saturday. Is there a way Blencowe could upset the odds? Let’s find out!

It wouldn’t be an overstatement to call Cris Cyborg a true legend of MMA. Now a 36-year-old, she started her professional career back in 2005. After spending over a decade fighting in promotions like Strikeforce and Invicta FC, she signed for the UFC in January 2016.

Just a year after joining the promotion, she got ahold of the UFC Women’s Featherweight Championship belt. She defended it two times before finally losing her first UFC fight – to Amanda Nunes in December 2018.

Cyborg bounced back in summer 2019, beating Felicia Spencer before deciding to end her UFC career and move to Bellator MMA.

In her first-ever fight under the Bellator banner, she beat the defending champ, Julia Budd, thus getting ahold of the Women’s Featherweight World Championship.

It happened in January 2020, and since then, we saw her defeat her title three times. One of those title defenses was against Arlene Blencowe, who will get another shot at the title this Saturday.

The first time these two fought, Cyborg won by submission in Round 2. It happened on October 15, 2020. Fast-forward to April 2022 and Blencowe wants to exact her revenge.

She got another chance due to the fact that after the loss to Cyborg, she went on to win two fights. First, she defeated Dayana Silva by TKO; then, we saw her win against Pam Sorenson by unanimous decision.

Sure, those are some good results, but the problem is that she hasn’t fought as a tough opponent as Cyborg in a while. Actually, Cyborg might be the most high-profile fighter she’s ever faced.

Cris Cyborg is one of the greatest fighters in the history of the sport, so winning on Saturday shouldn’t pose much of a problem for her. This explains why the Cyborg odds are so short. If you’re looking for better value, betting on “Cyborg by knockout/technical knockout” might be a good idea. If she pulls it off, she’s going to cause Blencowe the first KO/TKO defeat of her career.