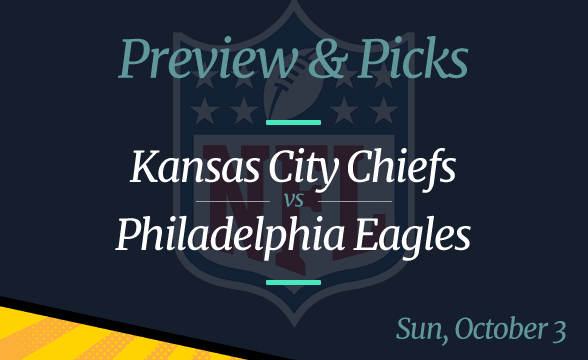 After back-to-back losses, the Kansas City Chiefs find themselves at the bottom of the AFC West table. Although the 2021 NFL season is still in its early stages, the #1 pre-season favorites for the Super Bowl LVI need to feel concerned. Their schedule will get real ugly real soon – in October, the Chiefs will play the Bills, WFT, and Titans.

The good news for them is that they also have one relatively easy matchup in October. On the third day of the month, they travel to Philadelphia to take on the Eagles. Can the Birds take advantage of the Chiefs’ poor form and get themselves a win? Let’s find out!

All odds are per DraftKings as of September 28.

Chiefs’ Worst Start of the Season in Mahomes Era

After three weeks, the Chiefs have a 1-2 record, which is their worst start since Patrick Mahomes came to Kansas City.

They started the season with a 33-29 win over the Cleveland Browns, which saw them going from behind, with two touchdowns in the final quarter.

In their next game, they lost to the Baltimore Ravens 36-35, with rookie running back fumbling the ball late in the game during a crucial play. Still, the defeat wasn’t only his fault – the Chiefs’ defense was nothing short of horrible.

The same story happened in Week 3, when they lost at Arrowhead Stadium to the LA Chargers. Once again, their defense was very disappointing, allowing some pretty easy passing TDs.

As a result, the Chiefs now have a points difference of 92-95, which makes their defense the worst in the conference. On the bright side, their offense is the second-best in the AFC, just behind the Buffalo Bills (94 points scored).

A Horrible Month for the Eagles?

The big question is how long will their losing streak last? Unfortunately for the Birds, their schedule looks very ugly, with some really tough games scheduled for October.

Their opponents in October include Kansas City, Carolina, Tampa, Las Vegas, and Detroit. Getting a single win in those five matches would be a decent success for this team. However, it’s not going to be easy to do it, especially not in the first four games of the month.

Their probably biggest challenge is the game against the Chiefs, who are desperate for a win. On the bright side, the Eagles are playing at home, where they’ll have their fans cheer them on.

This is going to be only the third game between these two teams played at the Linc. The previous was played eight years ago when the Chiefs won 26-16. A lot has changed since, but I expect another dominant win for the #1 Super Bowl favorites.

Pick: Kansas City Chiefs to win and cover the spread; over should hit, as well.