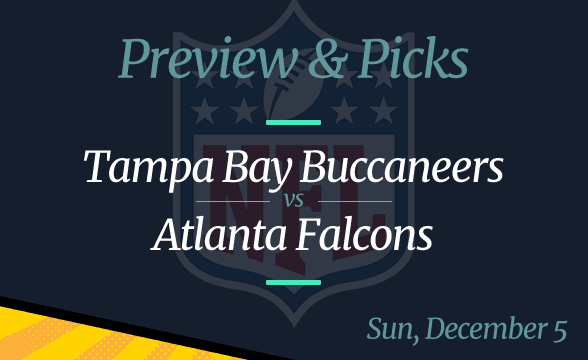 In Week 13, the Tampa Bay Buccaneers (8-3) travel to Georgia to take on the Atlanta Falcons (5-6) at Mercedes-Benz Stadium. The two NFC South rivals have already met once this season. It happened in September, when the Bucs won 48-25 at home. That was their third straight win against the Falcons, all of which happened with Tom Brady as their starting quarterback.

Online sportsbooks think Tampa will win once again. However, we could see a more exciting game than what oddsmakers are suggesting. The thing is that both teams won last weekend. The Falcons beat the Jacksonville Jaguars in Florida; the Bucs beat the Indianapolis Colts in Indiana after being 24-14 at halftime.

All odds are per FanDuel as of November 30.

Tampa is coming into Week 13 after back-to-back wins, which happened after two straight losses. The Bucs, however, did struggle last weekend against the Colts. They started the game slowly, but then switched to the top gear in the second half.

Their hero in that game was Leonard Fournette. The running back scored three rushing touchdowns in that game. He was also the man who scored Tampa’s only receiving TD. Another RB, Ronald Jones II also scored one running TD.

Tampa’s rushing game was superb, but the passing game wasn’t as impressive. Brady didn’t have the best game of his career, throwing 25/34 for 226 yards, one touchdown, and one interception. This was his fourth straight game in which he threw one or more interceptions.

Brady surely has what it takes to improve his stats; the only question is when he’ll start doing it? Knowing that the Falcons are among his favorite opponents, it could happen this Sunday. Brady is 9-0 against Atlanta overall.

The Bucs’ most recent win over the Falcons happened in Week 2 when Tom Brady threw for five touchdowns – his best performance thus far in the 2021 season.

The Falcons are coming into the Week 13 game after winning their fifth win of the season. They beat the Jaguars 21-14 last Sunday, which came after two straight defeats. They lost to the Dallas Cowboys and the New England Patriots, scoring just three points along the way.

As a result, they now have 199 points scored in 11 games. Only two teams from the NFC have scored fewer points than them.

On the bright side, their rushing game has been pretty impressive. It’s mostly thanks to their running back Cordarrelle Patterson, the man who scored two TDs in the game against Jacksonville. Nicknamed Flash, Patterson was out for two weeks before this game, which explains why his team did so badly in the offense.

Patterson can surely help the Falcons on Sunday, but that probably isn’t going to be enough to break the Bucs.

Picks: Tampa Bay Buccaneers to win and cover the spread; over to hit.

The Pennsylvania Department of Drug and Alcohol Programs, the Pennsylvania Gaming Control Board, and the Penn State University released a new report on Friday, looking into the rate of gambling participation in the Keystone State. Pennsylvania has embraced gambling in all of its variety, from sports to casinos, poker, and racetracks. This has created a […]

BetMakers Technology Group, a provider of odds comparisons, intelligent betting platforms, analytics, and trading solutions, has announced that it has signed an amended odds and data distribution agreement with Darby Development and the New Jersey Thoroughbred Horsemen’s Association. Darby Development Is Sure BetMakers Will Take Horseracing to the Next Level The renewed deal will see […]