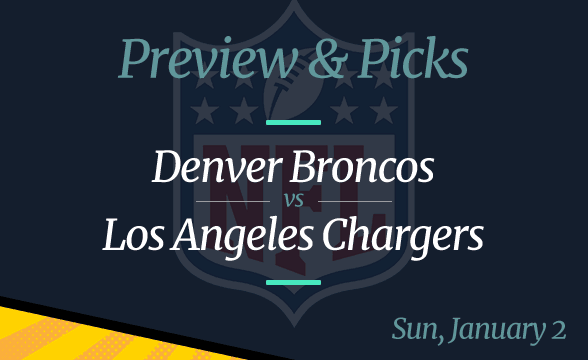 Both Denver Broncos and Los Angeles Chargers are coming off back-to-back losses, which have put their playoff future in jeopardy. The Chargers are in a slightly better situation as their record is 8-7. Meanwhile, the Broncos are on the other end of the .500 with a 7-8 record.

Both teams still have a chance to get to the postseason through Wild Card. The team that wins the Week 17 game on Sunday will get one step closer to achieving that goal.

All odds are per FanDuel as of December 27.

Teddy Bridgewater to Return for the Denver Broncos

The Broncos are coming off a loss to the Las Vegas Raiders last Sunday, which saw Drew Lock playing as their quarterback. The reason for that was that the Broncos starting QB Teddy Bridgewater was out with a concussion suffered a week earlier against the Cincinnati Bengals.

Although Lock wasn’t too bad against the Raiders, Bridgewater’s absence was felt on the field. The Broncos’ offense hasn’t been very productive even with him calling the plays with a total of 298 points scored in 15 games. Without Bridgewater on the field, they were relying mostly on their running backs, who didn’t do too great.

If the no.1 QB returns in Week 17, the Broncos are bound to do better in the offense. Scoring more than usual shouldn’t be a major issue as they’re locking horns with one of the worst defenses in the NFL.

Alarm Ringing for the Chargers

Just a couple of weeks ago, their postseason future looked bright. However, they’ve dropped in the ranking since. If the season ended today, they’d end up without a playoff berth. The reason for that is that they lost three of their previous five games.

The most recent of those losses was the most disappointing one. On Sunday evening, the Chargers lost to the Houston Texans, who were 3-10 before that game.

Everything went wrong for the Chargers, but their defense was their weakest link as usual. This season, they’ve conceded 411 points in 15 games, which is better than only one team from the AFC.

On the bright side, they still have a chance to qualify for the postseason if they win their remaining two games. First, they play against the Broncos, then they travel to Vegas to take on the Raiders. The problem is that they do not look capable of winning either of those.

Picks: Denver Broncos to win and cover the spread; under to hit

Macau Set to Finalize Casino Concessions Ahead of Expiry