Bethereum has posted its latest recap, marking the start of Round 2 of its betting contest as well as publishing a series of NCAA Basketball articles, explaining what college basketball is.

Social betting website Bethereum has posted its latest update, recapping on on the newest progress made in January 2020. Among the most recent achievements was the launch of Round 2 of Bethereum’s Betting Contest which will continue through March 15, 2020.

At the end of the contest, some 500 players who are ahead of the rest in the Leaderboard will divvy up a communal prize pool worth 30000 Bether. Bethereum will also provide the top 3000 players with an opportunity to enter a special lottery with 100 prizes worth 15000 Bether.

Bethereum was also covered in multiple media outlets, with Yogonet and Crytotalk just some of the few websites that featured the company’s profile on their websites, discussing the recent series of innovation in social gaming brought about by the company.

Before that, in December, Bethereum consolidated its status as a leader in social gaming, winning a distinction at SiGMA thanks to its blockchain-powered platform. Moving forward, Bethereum intends to expand beyond its current scope of operation, although no segment would be left behind.

Most recently, the company added NCAA Basketball Series to its Medium blog space, explaining the ins and outs of college basketball in great detail. By doing this, Bethereum has positioned itself not only as a place to make a wager, but also somewhere where you can learn more about sports betting and upcoming events.

Not least of all, Bethereum received another distinction, this time by Blockfyre, which ranked the project one of the top five most exciting initiatives in the space.

The Power of Community

Part of the success of Bethereum is self-explanatory. The platform has prioritized the community, drawing significant engagement from its Twitter and social media followers in general.

The rate of re-tweets, word-of-mouth and overall buzz around the project, paired with the dedication from the developers, has proven a winning formula.

Bethereum has made no promises too big or too small, and it has always delivered or tried to keep the public informed, improving its reputability and trustworthiness, something rare in the blockchain betting sector.

More importantly, Bethereum wants to capitalize on the community aspect, as the popular logic goes that if players are happy, they would most likely want to bring over their friends, leading to a natural scale of the player base – unforced and serving a purpose.

Besides, Bethereum’s team members have noted on multiple occasions that having better exposure gives them an incentive – as well as a clear direction – to improve.

From its monthly contests to weekly raffles, Bethereum has always listened to its community. 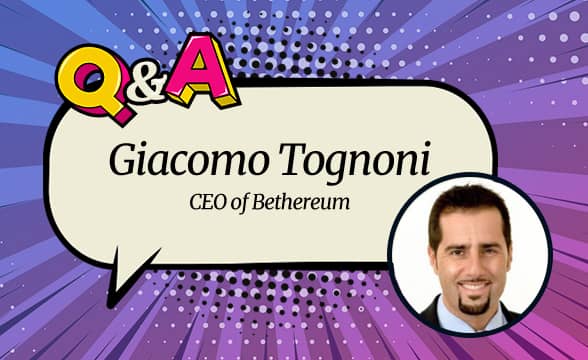 Interview: Bethereum Brings Fun and Social Back into Betting

Giacomo Tognoni is the current CEO of social award-winning gaming platform Bethereum. The company has recently claimed the Best Blockchain Startup of the Year” distinction at CESAwards and was subsequently nominated for the “Best Startup” category at SIGMA iGaming, which Bethereum won against a competitive field of entrants. Our interview with Giacomo focuses on the […]