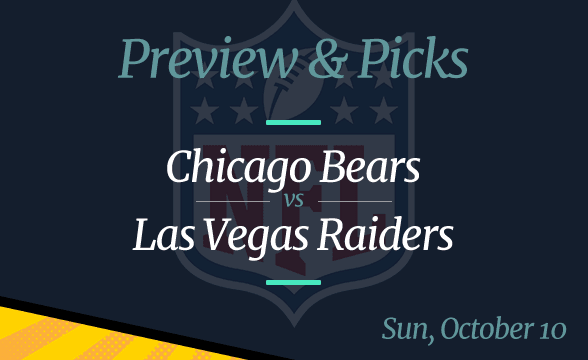 The Las Vegas Raiders suffered their first defeat of the season last weekend when the LA Chargers beat them 28-14. The good news for the Vegas team is that they’re favored to win their next game. The game in question is the Week 5 clash with the Chicago Bears, which will take place on the Raiders’ turf.

All odds are per DraftKings as October 8.

Derek Carr Needs to Bounce Back

After the first three weeks of the 2021 NFL season, the Raiders quarterback had an average of 401 yards per game.

Then, in Week 4, the Chargers defense found a way to stop him from doing much – Carr passed for 196 yards, his lowest of the season. He did, however, throw for two touchdowns, the same as he did in the previous three games.

Passing wasn’t the only problem for the Vegas offense in Week 4. They also failed to do much rushing-wise, moving the ball for only 48 yards.

Their defense, however, wasn’t too bad. They did concede 28 points, but that’s nothing out of the ordinary for this team. So far, they’ve allowed a total of 100 points, which makes the Vegas defense the sixth-worse in the AFC.

The Bears got their second win of the season last weekend. The team they defeated was the Detroit Lions, the only NFC team with a 0-4 record right now.

The Bears’ other win happened against the Cincinnati Bengals, a team that’s been in a decent form this season, but which isn’t projected to do much in the upcoming weeks.

That said, the Bears need to consider themselves lucky for having a relatively easy schedule so far. They won the two games in which they were favorites, while losing the two in which they were underdogs – to the LA Rams and the Cleveland Browns.

This time, they’re the underdog and there’s a reason for it. Their defense just doesn’t seem good enough to deal with Vegas’ passing game. Further, their offense has been pretty anemic so far, with just 64 points in four games. That’s the worst offensive record in the entire conference.

Knowing all this, it’s only reasonable to assume the Raiders are going to get themselves another win. And it should be a dominant win – they should be able to cover the five-point spread.

Pick: Las Vegas Raiders to win and cover the spread; the over should hit.

EPIC Risk Management Signs a 4-Year Deal with the PCA

Aristocrat to Release a Dune-Themed Slot Game on October 22