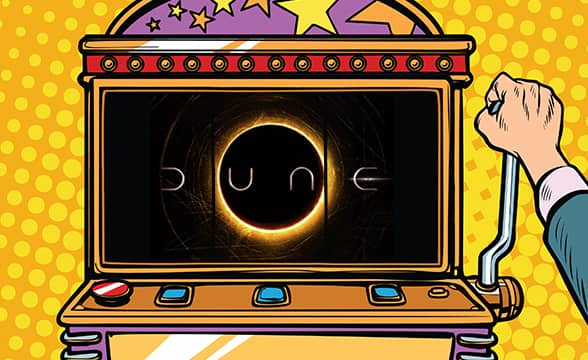 Dune, an unquestionable blockbuster will be released on October 22 around the US. Coinciding with the release of the movie, Aristocrat will launch its Dune-themed slot game. The slot game uses a Neptune Double cabinet and features unique movie-related content as well as a progressive jackpot.

Aristocrat to Launch Its Dune-Themed Slot Game This Month

Aristocrat Gaming has announced that it will release its newest slot game themed after the sci-fi movie Dune, coinciding with the release of the movie on October 22. The company said that the new slot game is housed within a Neptune Double cabinet. The Neptune Double cabinet offers an immersive experience featuring a 49-inch 4K monitor. Once the slot is released, not only Dune fans, but slot fans as well will be able to enjoy visuals from the newest motion picture while placing their bets.

This is, in fact, not the first movie-themed slot game released by Aristocrat. The company has previously launched a similar product that was Game of Thrones-themed. With that in mind, undoubtedly, this collaboration reaffirms the bond between the film and gaming industries.

Based on the 1965 novel Dune by Frank Herbert, the new movie, the second iteration of the book, is expected to be a blockbuster. The movie takes place on the desert planet Arrakis, which is also known as Dune. Aristocrat’s Dune-themed game features high-end graphics and even some of the creatures seen in the movie, such as the sandworm. The futuristic ornithopters, an aircraft that flies by flapping its wings, can also be seen within the new slot title.

Not unexpectedly, Aristocrat’s new slot game features a topper with Timothee Chalamet, who is the main protagonist of the new movie. Moreover, the slot game will play sound effects as well as music from the movie itself. Looking at prizes, we do see that Aristocrat’s Dune-themed game has a $500,000 progressive jackpot. Additionally, the game features mechanics offering multipliers, as well as free spins.

Aristocrat’s VP of gaming, Ryan Scott, was recently interviewed by CDC Gaming Reports and outlined that the new game will offer an experience similar to IMAX. He explained that the Dune-themed game has “got a great play, sound, and feel to it.” Scott revealed that both the game content, as well as the visuals are incredible. Acknowledging that the company has done a significant number of presentations, he stressed that so far, the feedback has been “unbelievable.”

GamblingNews recently had a chance to virtually meet with Lior Cohen of Betixon. The online gaming development studio has been growing rapidly over the past five years and continues to bring innovation to the industry. Betixon is involved in many aspects of the player experience, offering an array of appealing options to different regulated markets […]

The Australian Communications and Media Authority (ACMA) is not slowing down in restricting access to offshore gambling in the country, an industry that has been thriving for years before ACMA decided to take action a few years back. ACMA has requested from internet service providers (ISPs) to suspend access to five new offshore websites, including Fight Club, Kim Vegas, […]

Scientific Games’ Australian Lotteries IPO May Garnish as Much as $3B

American B2B gambling products and services provider Scientific Games is planning to go have its lottery business go public in Australia, which, according to professional industry analysts, can yield the company as much as $3 billion in USD. Scientific Games’ Australian Lottery IPO is Likely Set for Success The initial public offering operations are expected […]