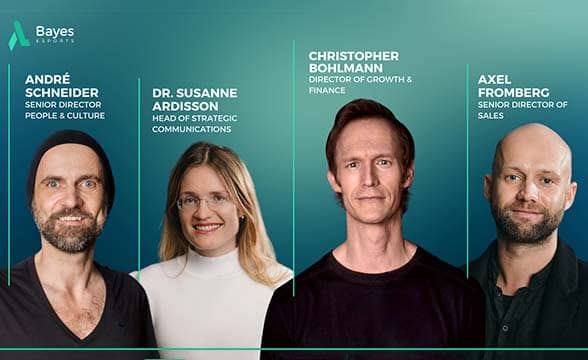 Bayes Esports, a B2B provider of official, live esports data for top game titles, has reinforced its management with a new addition. Christopher Bohlmann and André Schneider will be joining the team as director of growth and finance and senior director of people operations respectively.

Each of the two new appointees brings a unique skillset that will help Bayes Esports grow its business. The two will work alongside Martin Dachselt, the company’s chief executive and Amir Mirzaee, Bayes’ chief operating officer and help Bayes Esports manage its operations.

The two new appointees will also team up with the company’s head of strategic communications, Susanne Ardisson, as well as its senior director of sales, Axel Fromberg. The latter two are longer-standing members of Bayes Esports who will help the new entrants find their way around.

Bohlmann is an experienced investor who is well-familiar with the tech sector. Prior to joining Bayes Esports, Bohlmann used to work for a family business and later as a member of JP Morgan. He joined Bayes Esports this year and, before his promotion as director of growth and finance, worked as a strategic project lead.

André Schneider, on the other hand, has 17 years of experience in the people and culture sector. He has worked for some influential companies, including the energy drink brand Red Bull and the furniture juggernaut IKEA. Schneider has rich experience with international events and is a great addition to Bayes Esports’ management team.

Speaking about his new job, Bohlmann said that he is excited to join Bayes Esports. He noted that he has always longed to work in an emerging sector such as esports and help to shape the industry.

I remember when I started my career at JP Morgan, around the time when payment startups were just emerging as a new dynamic force. As an advisor I was contemplating what it would be like to actively shape a business within an emerging environment. For me, Bayes and Esports are the culmination of exactly that. The opportunity to be at the forefront of an exciting industry, and shape its evolution through the leader in esports data analytics.

Martin Dachselt, chief executive of Bayes Esports, welcomed Bohlamnn and Schneider to the company. He noted that the two are arriving at the right time as Bayes Esports currently needs a robust management team to complement its ambitions.

Our shared knowledge and expertise has been bolstered with the additions of Susanne and Axel, and we are also able to get a fresh and unique perspective from Andre and Christopher.

PlayAGS and Inspired Entertainment Merger Falls Through the Ground