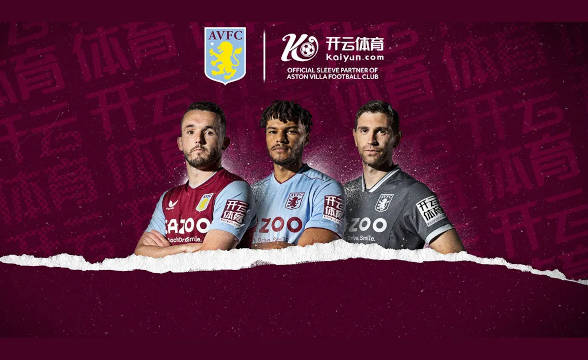 Aston Villa has revealed betting agency Kaiyun Sports as an Official Principal Partner and Official Sleeve Partner to the Premier League soccer club. The Asian brand is just beginning to expand its reach and clout in the European sports market and has found the opportunity to tie up an alliance with Aston Villa as a good way to gain a foothold.

Aston Villa to Have Kaiyun Branding on Player Sleeves

Kaiyun Sports prides itself on a strong and consistent reputation for being “Asia’s top digital sports platform,” bringing together sports and entertainment options for consumers and providing them with immersive online and offline experiences. Commenting on this partnership, Aston Villa CCO Nicola Ibbetson said that the team was delighted to be signing this partnership and provide experience to fans together with the platform.

Kaiyun Sports CMO, who was not named in the press release, added that the platform was happy to work with the team and help write “a new story in soccer cooperation.”

We will work together to create a safe online and offline interaction for users – a one-stop sports and entertainment platform, providing fans around the world with a top sports experience,” the executive concluded.

Aston Villa has been actively looking to strike a number of partnerships, some of which have come under criticism. Some four weeks ago, the club teamed up with Duelbits, a cryptocurrency-oriented betting platform, which became the official betting sponsor of the team.

Aston Villa’s ties with the cryptocurrency sector are not entirely new, though, as last year the company also teamed up for a non-gambling partnership with Chiliz, a Socios.com company, to launch the $AVL fan token. Fan tokens are blockchain assets that are used by fans to bring them closer to the clubs they support by having some rights in votes, or access to exclusive experiences. The Kaiyuan partnership is a continuation of this.

The partnership with Kaiyuan also comes in a rather fraught context for how soccer teams collaborate with betting companies and whether they may continue to do so. A review of the Gambling Act 2005 is pending and potentially bringing stricter changes to the way regulation in the sector happens.

Pixiu Gaming And Dan Marino Team Up, New Slots to Hit the Market in 2023