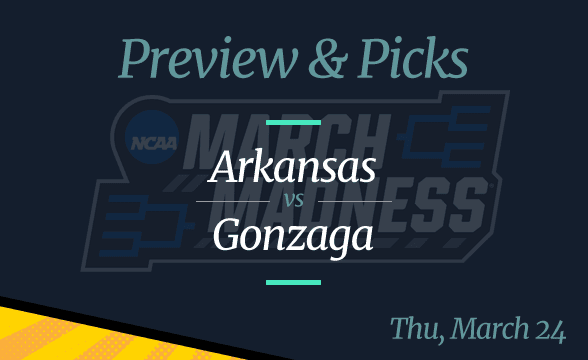 It’s time for NCAA Tournament Sweet 16, where one of the most interesting matchups is the Arkansas (#4) vs Gonzaga (#1) one. The last year’s runner-up is the no.1 favorite to win the 2022 NCAA Championship – the odds on the Gonzaga Bulldogs are +200 at most basketball betting sites.

To get the chance to compete for the title for the second year straight, the Bulldogs first need to do their job well in Sweet 16. That’s where they meet the Arkansas Razorbacks who, despite being huge underdogs, are always a tricky opponent.

Odds taken on March 21 from FanDuel.

All Eyes on JD Notae

In their previous game, the Razorbacks beat the #12 New Mexico State Aggies 53-48. You might not think of the win as impressive, but the fact is that they played against one of the toughest defenses in college basketball. With 63.2 points allowed, the NMSU defense was #32 in the country.

Before that game, we saw Arkansas beat Vermont Catamounts 75-71. This game too didn’t see a vintage performance by the Razorbacks, although they did score plenty of points. That said, these guys do know how to do well in the offense, especially when JD Notae is having a good evening.

With 18.4 points per game on average, Notae has been their most lethal weapon this season. The guard has been decent in terms of assists (3.6 per game) and rebounds (4.5 per game) as well. His performances in 2022 didn’t get unnoticed – the 23-year-old got named an AP All-American, thus becoming the first Razorback to get this honor since Bobby Portis in 2015.

Gonzaga Isn’t as Great as Everyone Thinks?

After finishing the regular season with a 26-3 record, the no.1-seeded Gonzaga came to March Madness as a huge favorite to win the title. So far, the Bulldogs have won two games in the playoffs, although neither of those saw them impress.

In their previous game, they defeated the #9 Memphis Tigers 82-78. The game finished with just four points advantage for Gonzaga, the team that was seen as a 12-point favorite in the eyes of the bookies.

Gonzaga’s first March Madness game saw the Bulldogs win 93-72 against the #16 Georgia State Panthers. In that game too, they failed to cover the spread – the bookies had it at 24 points.

What’s even worse is that Gonzaga was dreadful until late in that game. In fact, at one point in the second half, the Bulldogs were trailing behind the Tigers.

Despite winning a lot of games so far, the Bulldogs haven’t been too impressive in 2022. In fact, their two March Madness games showed they had plenty of weaknesses. Gonzaga’s previous two opponents weren’t able to take advantage of those weaknesses, but maybe Arkansas will?

Oddsmakers don’t think so, but the Razorbacks sure seem capable of making the Sweet 16 game more interesting. That said, Arkansas +9 definitely seems like a good option.

Picks: Gonzaga to win but not cover the spread; over 154 points