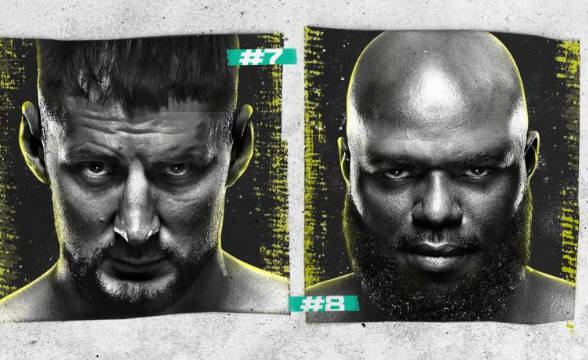 UFC Fight Night 207 is on the program on Saturday, June 4 at UFC Apex in Vegas. The headliner event is the clash between Alexander Volkov and Jairzinho Rozenstruik, two fighters currently in the top 10 of the UFC heavyweight rankings.

In fact, Volkov is currently sitting in the #7 place, with Rozenstruik being just behind. That said, winning on Saturday could mean moving up the UFC ladders a few spots more. Actually, the winner could pave himself a path to the title challenge in the future.

Speaking of the title, neither fighter has had the opportunity to fight for it, although both have been in the conversation for the championship bout. For example, after destroying Alistair Overeem by TKO in February 2021, Volkov was seen as a potential title challenger. In fact, that probably would’ve happened if he won against Cyril Gane in the following fight.

When it comes to Rozenstruik, at one point he was 10-0 in his professional career, which is why Dana White and his UFC colleagues decided to put “Bigi Boy” against Francis Ngannou. Unfortunately for Rozenstruik, he got KO-ed in that fight and his opponent went on to win the UFC Heavyweight Championship in his next bout.

Knowing all this, you simply have to feel excited about the Alexander Volkov vs Jairzinho Rozenstruik fight.

All odds are per FanDuel as of May 31.

Alexander Volkov Looking to Bounce Back After a Loss in March

March 19, 2022, was when we saw Volkov get inside the octagon the last time. That day, he locked horns with Tom Aspinall in the headliner fight of UFC Fight Night 204. Unfortunately for him, he lost by submission, suffering his 10th loss since the start of his professional career.

Less than three months after the defeat, Volkov is coming to the big stage once again. This time, he’s taking on one of the best strikers in the division. Not letting Rozenstruik land too many hard punches is probably the key to winning.

The good news for Volkov is that he’s got the physique to keep the opponent away from him. The thing is that the 33-year-old Russian fighter is one of the tallest UFC fighters. Standing at 6’7, Volkov is five inches taller than his next opponent. Further, Volkov also has a longer reach (80 inches) than Rozenstruik (78 inches).

Still, that didn’t help him when he fought a fighter very similar to Rozenstruik. The man in question is Derrick Lewis (6’3 height, 79” reach), who’s also famous for the power of his strikes. When they fought in 2018, Lewis won by knockout.

Rozenstruik is 12-3 in his professional career with 11 wins by knockout. Knowing this, it’s clear that striking is his most powerful weapon.

When it comes to losses, Rozenstruik has lost two fights by decision and one by knockout. The only fighter to beat him by KO is Francis Ngannou, the record holder for the hardest punch in history (the force equal to 96 horsepower).

Rozenstruik did lose to the current UFC Heavyweight Champion, but he’s also beaten some real elite fighters in his career. Andrei Arlovski, Junior dos Santos, are Augusto Sakai are just some of the opponents he’s won against by KO/TKO. Can he add Volkov to his list?

We think so too, especially knowing that surprises happen very often in the heavyweight division. After all, Bigi Boy just needs to land one lucky punch to take Volkov down.