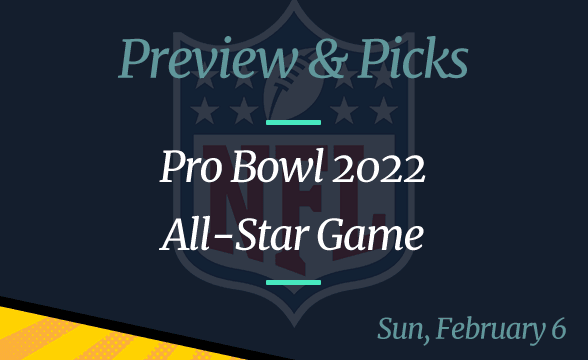 The 2022 Pro Bowl is heading to Vegas where the best players from the AFC will take on those from the NFC. The all-star game is scheduled to take place on Sunday, February 6.

Team AFC is coached by Mike Vrabel of the Tennessee Titans, who will have plenty of superstars at his disposal, starting with the Los Angeles Chargers quarterback Justin Herbert. Speaking of star power, the NFC roster is even more impressive. Coach Matt LaFleur will have his Green Bay Packers colleague Aaron Rodgers calling the signals, whose backup at the QB position is going to be legendary Tom Brady.

Can AFC Beat NFC for the Fifth Straight Time?

After three years of unconference bowls, the NFL all-star game returned to the AFC-NFC format in 2017. Team AFC won that year’s Pro Bowl, as well as the next three, with the 2021 game being canceled due to COVID.

In the most recent Pro Bowl, the AFC’s quarterback was Lamar Jackson of the Baltimore Ravens. He was supposed to be a backup in this year’s game, but after suffering an injury, Jackson was replaced by Mac Jones of the New England Patriots.

The Pats’ rookie QB is coming off an impressive season and is expected to do well on Sunday. Still, the man in the spotlight is likely to be Justin Herbert, whose passing yardage in the regular season was second in the league (behind Brady).

Mike Vrabel surely has plenty of weapons to choose from when passing is concerned, but it seems that the AFC’s strongest point this year is their running game. It’s mostly because of the Indianapolis Colts running back Jonathan Taylor, the NFL leader in rushing yards and rushing TDs.

Aaron Rodgers is named the starting quarterback for the NFC, but we will probably see Tom Brady spending a lot of time on the field as well. For the 44-year-old, this could be the very last time he’s on the field as rumor has it that he plans to retire.

Apart from the two veterans, Matt LaFleur has another exceptional quarterback on his roster – Kyler Murray of the Arizona Cardinals.

These guys will have plenty of support on the receiving end as the league’s best wide receiver is in the team. The man in question is Cooper Kupp of the Los Angeles Rams, the team that’s made it to the Super Bowl LVI.

Speaking of the Rams, this team has two more Pro Bowlers, both of whom are supposed to start for the NFC defensive team. The men in question are Aaron Donald (tackle) and Jalen Ramsey (cornerback).

With these guys on the roster, the NFC looks destined to end the AFC’s superb run. Not only that, but we could see them blow out Vrabel’s boys on Sunday.