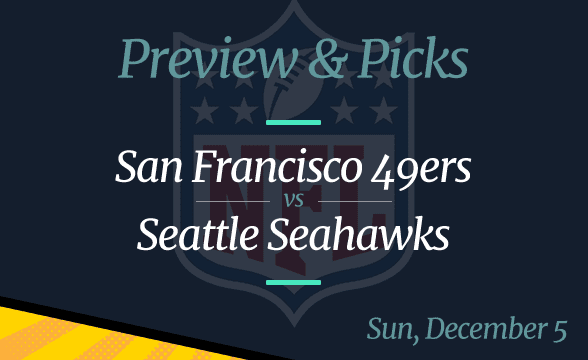 The Seattle Seahawks are in desperation mode, they need a win ASAP. With a 3-8 record so far, their playoff prospects seem very gloomy. If they miss qualifying, it’s going to be only the second time in the Pete Carroll era that they’ve failed to get past the regular season.

They haven’t done much in the 2021 season because their best player Russell Wilson was out for several weeks with an injury. However, the franchise legend is back and is ready to help the Seahawks challenge the Wild Card berth. To get in the race, they need to beat their divisional rivals, the San Francisco 49ers.

The bad news for Seattle fans is that this team is seen as the underdog. Still, they surely have a great record against their AFC West foes, having won each of the previous three 49ers vs. Seahawks games.

All odds are per FanDuel as of December 2.

After a disappointing start of the season – 2-4 in the first six weeks – the Niners are now playing top football. They are 4-1 in the previous five games, coming into Week 13 after three straight wins.

Although the Niners are favored to win, they need to be cautious. Even though Seattle hasn’t been great in 2021, this team definitely has plenty of talent on the roster. This goes especially for the Seahawks’ defense, which is currently the second-best in the NFC.

A Must-Win for the Seahawks

The Seahawks need to win this game in order to keep their playoff dreams alive. They have the motivation, but what about the player quality? The fact that they’ve conceded only 226 points so far this season means that they surely have plenty of quality in their defensive team.

The reason why they haven’t won more games in 2021 is that their offense hasn’t been very productive. The explanation behind this is that their QB Russ Wilson has had to sit out several games – from Week 6 to Week 10.

Wilson hasn’t played great even after making a comeback, which made the fans wonder whether coach Carroll was hasty to put him back on the field. In his first game since returning, he made zero touchdown passes while getting two throws intercepted.

Wilson failed to make a TD pass in the next game, but then in Week 12, we saw him throwing for two TDs and no interceptions. The last week’s game was one of his best this seasons, suggesting that there’s much more to come from him.

If Wilson plays the way he used to, the Seahawks are bound to score at least a couple of TDs. And if their defense just plays, as usual, the Niners probably aren’t going to be able to score enough to get a win.

Picks: Seattle Seahawks to win; under should hit