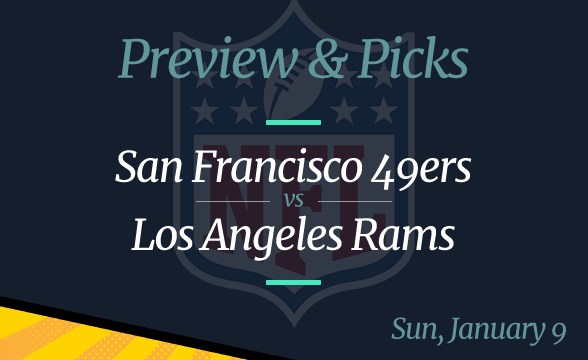 The 49ers vs Rams game is decisive for both teams. The Rams need to win the game to secure the divisional title. When it comes to the Niners, they will book a ticket to the postseason only with a win in Week 18. So, which team will achieve its plan?

Oddsmakers think it’s going to be the Rams. However, they thought the same in their first game of the season, which the Niners won 31-10. Still, that game took place on San Francisco’s turf; the Week 18 game is taking place at SoFi Stadium in Los Angeles.

All odds are per FanDuel as of January 4.

Trey Lance to Make His Third Start of the Season

With Jimmy Garoppolo struggling with a finger injury, the Niners’ put rookie Trey Lance in the starting quarterback role. He made his second start last weekend when his team beat the Houston Texans 23-7. However, despite the win, Lance didn’t do too great in that game.

The rookie threw for two touchdowns but also had one pretty disappointing interception. That said, he mustn’t make such mistakes in Week 18. The same goes for his teammates like receiver Deebo Samuel who had one drop against the Texans.

The Rams Looking for the Sixth Straight Win

The team from Los Angeles has been fantastic over the last couple of weeks. The Rams won each of their previous five games, even though they played against some really tough opponents along the way. One of those was the Arizona Cardinals, which resulted in the Rams overtaking the #1 position in the NFC West.

The trouble for the Rams is that the Cardinals have a better divisional record than them. What this means is that if the Rams lose and the Cards win in Week 18, Arizona will win the division. However, just by beating the 49ers, the Rams would secure the divisional title.

Oddsmakers think the Rams will win and there are several reasons for that. First of all, most of the Rams key men are fit and ready for the game, which isn’t the case with the Niners. Secondly, the Rams have been excellent at home with a 5-2 record this season. For all these reasons, a home win seems very likely.

Picks: Los Angeles Rams to win and cover the spread; under should hit